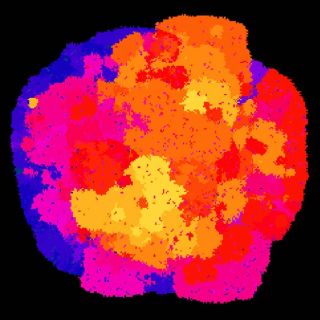 Researchers study the evolution of altruism with evolutionary processes inside a computer. Here, digital organisms in Avida self-replicate and fill empty spaces (black). Mutations can occur during reproduction, which often creates organisms with different fitness levels (represented by different colors). Over many generations, those mutations that happen to create more fit organisms tend to be selected for, as in naturally evolving populations.
(Image: © Kaben Nanlohy, Michigan State University.)

One of the major questions in evolutionary biology is how altruism, or the act of helping another individual at your own expense, evolved. At first glance, "survival of the fittest" may seem to be best achieved by selfish individuals. However, altruistic behavior occurs in many species, and if it were not adaptive, we would expect it to disappear through the process of natural selection.

Although, strictly speaking, specific genes usually do not cause specific behaviors, behavior does have a genetic component, and thus can be inherited. One classic explanation for the evolution of altruism is that individuals may have genes that cause them to behave altruistically towards their relatives, who also have these "altruism genes," and thus the genes are successfully passed to the next generation.

What if animals had another way to decide who to help, such as only helping others who were physically very similar to themselves (which could indicate overall genetic similarity) or helping organisms with some sort of physical marker that indicated that they, too, carried the altruism gene?

A recent study that appeared in the journal Proceedings of the Royal Society B by researchers at the BEACON Center for the Study of Evolution in Action at Michigan State University uses digital evolution, in which digital organisms evolve inside a computer, to understand which recognition mechanism best contributes to the spread of altruistic behavior.

Why study digital evolution? As the famous biologist John Maynard Smith once said, "We badly need a comparative biology. So far, we have been able to study only one evolving system and we cannot wait for interstellar flight to provide us with a second. If we want to discover generalizations about evolving systems, we will have to look at artificial ones."

The software used by Jeff Clune — and his colleagues Heather Goldsby, Charles Ofria and Robert Pennock — creates just such an artificial system: the digital organisms live, reproduce, and die, and scientists can observe this virtual evolution in action to learn about the dynamics of evolving traits in a population.

Using this software, the researchers looked at different ways that individual organisms could direct their altruism to see which method would evolve most successfully. First, they allowed organisms to either help relatives or to help genetically similar individuals.  They found that, if given the choice, organisms were more successful when they helped genetically similar organisms than if they were altruistic towards their kin.

The BEACON team then went one step further: what if the organisms were able to tell who was altruistic, and then only help those individuals? Humans apparently prefer to help others who are also willing to help, according to the following article. Could organisms without complex cognitive abilities do the same?

It turns out that some can. Richard Dawkins suggested that traits indicating the presence of an altruism gene, such as green beards, could assist organisms in choosing where to direct altruistic behavior. These so-called "greenbeard genes" have been found to exist in nature: for example, in one species of fire ant, ants with a particular gene will kill other ants that are lacking it, sparing the ants who share the gene.

The scientists gave the digital organisms the equivalent of greenbeard genes to see if they would use them to direct altruistic behavior.

Otherwise, the organisms would only do the minimum amount necessary to reap the benefits of being in the altruistic greenbeard club, and no more — which keeps the altruism levels low.

Until recently, biologists had only been able to look at the results of the one evolutionary process that produced life on Earth. Now, with technology such as digital evolution, scientists can observe evolution as it occurs and make new discoveries about questions that have long interested us all about why we behave the way we do.