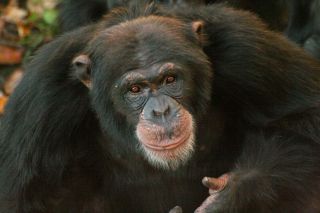 Chimpanzees have now shown they can help strangers at personal cost without apparent expectation of personal gain, a level of selfless behavior often claimed as unique to humans.
(Image: © Max Planck Institute)

Chimpanzees have now shown they can help strangers at personal cost without apparent expectation of personal gain, a level of selfless behavior often claimed as unique to humans.

These new findings could shed light on the evolution of such altruism, researchers said.

Scientists think altruism evolved to help either kin or those willing and able of returning the favor—to help either one's genetic heritage or oneself. Humans, on the other hand, occasionally help strangers without apparent benefit for themselves, sometimes at great cost.

To investigate when chimpanzees might aid either humans or each other, researchers studied 36 chimps at Ngamba Island Chimpanzee Sanctuary in Uganda that were born in the wild. In experiments, each chimp watched a person they had never seen before unsuccessfully reach for a wooden stick that was within reach of the ape. The person had struggled over the stick beforehand, suggesting it was valued.

Scientists found the chimpanzees often handed the stick over, even when the apes had to climb eight feet out of their way to get the stick and regardless of whether or not any reward was given. A similar result with 36 human infants just 18 months old yielded comparable results.

"Chimpanzees and such young infants both show that some level of altruism may be innate and not just a factor of education," said developmental and comparative psychologist Felix Warneken at the Max Planck Institute for Evolutionary Anthropology at Leipzig, Germany. "People say we become altruistic because our parents teach us so, but that young children are originally selfish. This suggests maybe culture is not the only source of altruism."

Still, humans at the sanctuary provide the chimpanzees food and shelter, so helping people out could simply be in their best interests. Experiments were then needed to see how willing the apes were to help out unrelated chimps.

The researchers set up closed rooms that each held a piece of banana or watermelon. The only way for a chimp to get in was if an unrelated spectator ape released a chain to open the room. Warneken and his colleagues found the spectators often altruistically helped the other chimps get the fruit, even if they got no reward themselves, findings detailed June 25 in the journal PLoS Biology.

These findings suggest the roots of human altruism go deeper than previously thought, reaching back as far as the last common ancestor of humans and chimpanzees.

"There is a biological predisposition to altruistic tendencies that we share with our common ancestor, and culture cultivates rather than implants the roots of altruism in the human psyche from primordial forms to more mature ones," Warneken told LiveScience.

Primatologist Frans de Waal at Emory University in Atlanta noted he recorded hundreds of cases of altruism among chimpanzees, "but skeptics like to downplay the evidence by saying it is not based on controlled experiments." These new experiments "thus confirm what observers of chimpanzees had said all along."

Still, altruism is rarely seen in chimps in the wild, and past research from the Max Planck Institute and others actually suggested that chimpanzees were not capable of human-like altruism. For instance, when chimps had the option of pulling a bar to feed either just themselves or themselves and another at no cost, UCLA primatologist Joan Silk and her colleagues had found the apes were no more likely to choose either option.

"In that experiment, maybe they were so occupied for retrieving food for themselves that they had no attention to spare for others," Warneken said. "So one difference between humans and chimps might be the ability to read the intentions of others and discriminate whether help is needed or not. You might have to make it very obvious that there's a problem the other faces."

Also, if chimps feel there is little chance they can get food for themselves, "maybe altruistic tendencies collapse," Warneken added. "For humans and chimps, selfish and altruistic motives are in competition with each other, and it could be that with chimps, selfish motives have to be pushed far off to the side to make room for altruism. So what distinguishes humans and chimps is not whether or not chimps have altruism but how fragile altruism might be."

Silk noted future experiments could test "how much the chimps are really willing to give up for such altruism." She added the experiments Warneken and his colleagues performed could be conducted with her own chimps, to see whether the absence of altruism they saw before "was based off the task we had them perform, or perhaps the individuals themselves."