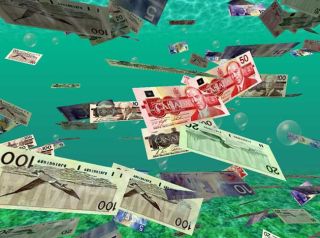 Screensaver of floating money used in some of the experiments.

Just the mere thought of money can turn a person selfish, so that he helps others less often and prefers to play alone, a new study shows.

In a series of nine experiments, researchers found that money enhanced people's motivation to achieve their own goals and degraded their behavior toward others. The concept of money, they suggest, makes a person feel more self-sufficient and thus more apt to stand alone.

The scientists said the study had nothing to do with making a person feel wealthy. When real or fake money, or even a photo of cash, was placed in sight of participants, they became selfish.

The results could explain why the topic of money can be so detrimental to a couple's lasting bond.

"In our experiments, the people who are reminded of money really worked hard toward their own goals. But that might not be conducive to a good interpersonal relationship," said study leader Kathleen Vohs of the Carlson School of Management at the University of Minnesota.

The scientists split 50 undergraduate students into two groups. One was primed with the concept of money; other served as a control and was not primed.  A few methods were used to get the participants thinking about money: In some experiments, a stack of play Monopoly money was within a subject's peripheral view, or a subject would unscramble word phrases dealing with money, while in others a participant would sit in front of a computer screensaver showing pictures of floating money [image].

The subjects were unaware the money was even a part of the experiments as they filled out unrelated questionnaires.

Then scientists gave the subjects a challenging problem to solve with the experimenter letting them know he was available for help if needed. Sure enough, the money subjects persisted much longer before asking for help.

In one test, a participant sat in a lab filling out a questionnaire when a supposed student walked into the room and said, "Can you come over here and help me?" She explained that she was an undergraduate student and needed help coding data sheets, each of which would take five minutes. Some of the participants didn't help at all, Vohs said. The control group volunteered an average of 42.5 minutes of their time, whereas the money group gave about 25 minutes.

Another experiment gave participants the opportunity to lend a helping hand in a situation requiring no skills. In a staged accident, a random person walked through a room where a participant sat filling out a questionnaire, and spilled a bunch of pencils. The money participants picked up far fewer pencils than the controls.

To understand how money affects interpersonal relationships, the scientists told each participant they would have a conversation to acquaint themselves with another participant. While the experimenter went to retrieve the other subject, the participant was to set up two chairs for the engagement. The subjects in the money group put more physical distance between themselves and new acquaintances compared with control subjects.

When choosing between two activities--such as an in-home catered dinner versus four personal cooking lessons--the money-primed subjects chose individually focused activities more often. And when given the option of working with another participant or working alone on an advertising project, fewer money subjects chose teamwork.

The results, detailed in Nov. 17 issue of the journal Science, showed no differences in terms of socioeconomic status or gender.

A take-home message, Vohs explained, is that "cooperation really goes down the drain when money is an issue."

For business managers, this could translate into keeping the idea of money in the background.

"In a lot of businesses, we train our MBA's to work in teams," Vohs said. "If the team has a sales goal, then to the extent that money is really a big topic to that team, you're likely to see that cooperation is going to be reduced."

And for couples who want to work as a team, she said, taking money out of the equation can only help.