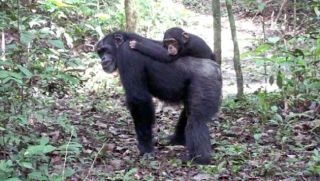 Chimpanzees can be altruistic just like humans, according to a new study that found 18 cases of orphaned chimps being adopted in the wild.

The kind-hearted chimp parents were discovered in the Taï forest in the West African country Ivory Coast. The adoptive caregivers, both male and female, devoted large amounts of time and effort to protecting their young charges, without any obvious gain to themselves.

"I don't know of any other cases of unrelated orphans being adopted," said research leader Christophe Boesch of the Max Planck Institute for Evolutionary Anthropology in Germany. He said the young chimps had lost their genetic parents to predation, injury and other causes.

Until now, some scientists have thought that altruism, or engaging in a costly behavior to aid another without any benefit to oneself, was strictly a human trait. In studies of captive chimpanzees — humans' closest living relatives — instances of selfless giving are rare.

"Based on some of the captive studies, you see very strong claims that what makes humans special is this ability to cooperate and be altruistic toward one another," Boesch told LiveScience. "In that sense the observation of Taï forest requires a big shift in our thinking about what makes us human, in the sense that this ability to be altruistic is something that we also see in chimpanzees."

The finding does tie in to other research of chimps in the wild that found the animals often share food, even meat, which is a very valuable resource. While some experts have argued that this was proof of chimpanzee altruism, others countered that sharing food could be more of a tit-for-tat behavior, and that there's no way to prove the receiving chimps don't reciprocate later on.

But adoption seems like a stronger case for philanthropy, since the adoptive chimpanzee parents don't seem to reap any immediate reward, and could likely survive on their own much easier without a youngling to care for, the researchers say.

"Some adoptions of orphans by unrelated adults lasted for years and imply extensive care towards the orphans," Boesch said. "This includes being permanently associated with the orphan, waiting for it during travel, providing protection in conflicts and sharing food with the orphan."

Another notable aspect of the finding is that even though parenting normally lies in the domain of female chimpanzees, half of the adopting parents in the study were male. Only one of these turned out to be the genetic father of his child.

"What really surprised me in looking at the long-term data is to see that some of these adult males go really far in adopting a motherly role, carrying the baby on their back, sharing a nest, helping babies to climb trees, really caring a lot," Boesch said. "Normally mothers do this, but not males."

One adoptive male, Freddy, literally went out on a limb for his adopted child Victor.

"It was just an amazing sight to see such a big powerful male as Freddy bridging gaps in trees with his body to help the whimpering little Victor to reach the branches with fruits," Boesch recalled.

One guess for why altruism seems rare in captivity, Boesch said, is that there just isn't as much need — there is usually enough food, and enough care, for everyone to survive as-is. But in the wild, particularly the Taï forest, survival is not a given. The chimpanzees face fierce predation by leopards, and scant food resources. This tough situation may have inspired group solidarity and cooperation to survive.