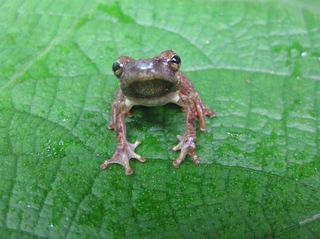 Hyperolius Nimbae- has been found after 43 years. Re-discovered by Dr.N’goran Germaine Kouame, in a swampy field in Danipleu, an Ivorian village near the Liberia border.
(Image: © Ngoran Germain Kouame/Conservation International)

A global quest to find several "lost" species of amphibians has rediscovered three species that have not been seen for decades, conservation groups announced today.

The so-called "Search for the Lost Frogs," is attempting to find 100 species of amphibians that had been thought extinct, but that scientists believe may be surviving in small populations. [Images: Top 10 Lost Amphibians]

The three animals that have been rediscovered so far include a Mexican salamander not seen since it was discovered in 1941, a frog from the Ivory Coast (the Mount Nimba Reed Frog) missing since 1967 and another frog from the Democratic Republic of Congo (the Omaniundu Reed Frog) lost since 1979.

"It's pretty extraordinary to think about just how long it has been since these animals were last seen," said search organizer Robin Moore, of Conservation International. "The last time that the Mexican Salamander was seen Glen Miller was one of the world's biggest stars, while the Mount Nimba Reed Frog hasn’t been seen since the year the Beatles released Sgt Pepper's Lonely Heart Club Band and the Omaniundu Reed Frog disappeared the year that Sony sold its first-ever Walkman."

Amphibians around the world are threatened by pollution, climate change, habitat loss from development, and a frog-killing fungal infection that causes chytridiomycosis, a disease that has wiped out entire populations, including some whole species, of amphibians.

Scientist Sean Rovito from the Universidad Nacional Autonoma de Mexico found the pink-footed, brown Cave Splayfoot Salamander (Chiropterotriton Mosaueri) in a cave system which is only accessible by repelling down a large pothole.

"I felt tremendously lucky not only to have found these magnificent salamanders, but also to know that both of these species persist in the wild after so many years," Rovito said.

Jos Kielgast from the Natural History Museum of Denmark rediscovered the third species, the Omaniundu Reed Frog (Hyperolius sankuruensis), from the Congo, a dark brown frog with bright green — almost fluorescent looking — spots. Kielgast found the frog when he heard its call, searching for it for over an hour.

Conservationists are excited about the discoveries, but say they also highlight the steep decline in the world's amphibian species in recent decades, with more than a third of all amphibians threatened with extinction.

"These are fantastic finds and could have important implications for people as well as for amphibians. We don’t know whether study of these animals could provide new medicinal compounds – as other amphibians have, and at least one of these animals lives in an area that is important to protect as it provides drinking water to urban areas," Moore said. "But these rediscovered animals are the lucky ones – many other species we have been looking for have probably gone for good."

The first phase of the Search for the Lost Frogs campaign, also sponsored by the IUCN Amphibian Specialist Group, will be continuing until the opening of the Convention on Biological Diversity in Nagoya, Japan in October, with further rediscoveries expected.