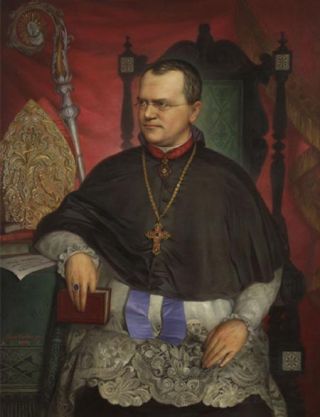 Oil Painting of Abbot Gregor Mendel. Mendel conducted his famous experiment at the Abbey of St. Thomas in what is now Brno, Czech Republic. He was elected Abbot of the St. Thomas friars in 1868, after which he had little time for science. Mendel may have been disheartened by the lack of reaction to his pea paper, but he knew that his discovery was important. Not long before his death in 1884, he told a scientific colleague, "My time will come."
(Image: © Field Museum, Stepan Bartos)

Kids may wrinkle their noses at peas, but scientists grant a lot more respect for the enormous role the little green legume seeds played in the history of genetics. Working in the solitude of an Austrian monastery, one 19th-century holy man managed to unravel the basic principles of heredity with just a handful of pea species that he bred and crossbred, counted and catalogued with monastic discipline. While plant and animal genes were Gregor Mendel's original focus, his ideas later made sense of our complex human workings, too, kicking off the scientific discipline of genetics.

Today, Mendel is revered as the father of genetics, but the Austrian's work on heredity didn't initially make the kind of big splash in the science world achieved, for example, by his contemporary, Charles Darwin. Mendel wasn't a traditional scientist, however.

Gregor Johann Mendel was born July 20, 1822 in a region of Austria that’s now part of the Czech Republic. He grew up on the family farm and worked as a gardener. He also studied beekeeping. Despite working for a time as a primary and secondary school teacher and studying at the University of Vienna, Mendel was first and foremost a full-time monk. Mendel lived at the Augustinian Abbey of Brno (then part of the Austro-Hungarian Empire) from 1843 until his death in 1884, acting as its revered Abbott for more than half of those years.

When Mendel began his experiments on the pea plants of the monastery garden in 1856, at first merely to develop new color variants and then to examine the effects of hybridization, it was independent of any university and well outside of the public eye.

Some genes are bossier

In the 19th century, it was commonly believed that traits — whether plant, animal or human — were passed on to offspring in a blend of characteristics "donated" by each parent. Heredity was a poorly understood in general, and the concept of a gene did not exist at all.

It was in this scientific environment that Mendel set out to study 34 subspecies of the common garden pea, a vegetable noted for its many variations in color, length, flower, leaves and for the way each variation appears clearly defined. Over eight years, he isolated each pea trait one at a time and crossbred species to note what traits were passed on and what traits weren't from one generation to the next.

Mendel's meticulous study produced astonishing results: Not only did the monk discover the idea of dominant and recessive traits, he was able to apply a consistent mathematical formula that explained the frequency with which each trait appeared. His discoveries would be summarized into some basic principles:

Mendel gets his due eventually

The importance of Mendel's work wouldn't be recognized for another 40 years, well after his death. The monk's relative obscurity in scientific circles meant that few institutions took notice of his original published results. His forgotten papers resurfaced only after further work in genetics began to make some sense of his then-unconventional theories.

The chromosome theory of inheritance, or the idea that we receive a combination of traits from each parent carried on a set of distinct pairs, was proposed in 1902 and was the first study to rely heavily on Mendel's ideas of dominant and recessive traits.

When Mendel's principles were fully incorporated in the early 20th century, genetics really took off.

By 1909, a handful of funny-sounding names such as alleles, zygotes and others were finally pinned to the things Mendel had first described in his humble experiments, and scientists launched into a century-long frenzy to explain how all of our biological quirks and quarks came to be.