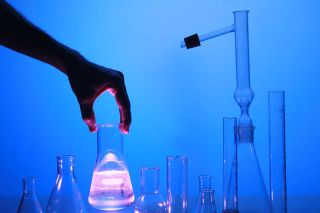 Scientists removed genetic material from one microbe species and successfully installed it into the cellular body of another, a baby step on the path to creating artificial life.

Biologists hoping to one day whip up life from scratch say they are one step closer to their goal following the successful transplant of genetic material from one microbe species into the cellular body of another.

Outwardly, the new bacterium looks like its fellow microbes, but inside it carries foreign DNA and proteins.

“It’s equivalent to converting a Macintosh computer to a PC by inserting a new piece of software,” said study team member J. Craig Venter, who leads the J. Craig Venter Institute in Maryland where the research was conducted. Venter is known as the man who set up his own company and raced a government effort to fully sequence the first human genome.

The team says their achievement, detailed in the June 29 issue of the journal Science, marks an important step toward creating artificial life with human-crafted genomes. A genome is the complete set of DNA for an organism, and provides all the necessary instructions for making life-essential proteins.

Scientists have been transferring partial and whole genomes between cells for many years now, but such transplants have typically involved cells from higher-level “eukaryotic” organisms whose DNA are bundled together into compact chromosomes, which are themselves encased in a cellular nucleus that is relatively easy to transfer from one cell to another.

In contrast, the new study involves the transfer of pure DNA from simpler “prokaryotic” organisms, without any accompanying proteins or cellular structures. If the experiment failed, it would have suggested that DNA by itself is insufficient to take complete control over the cellular machinery of another cell.

“If there were key accessory proteins that were required to boot up a chromosome in a new cell, it would be a huge barrier to the field of synthetic genomics,” Venter explained, “because it would take a long time to sort out those proteins, know which ones were involved, [and get] them in the right concentrations.”

The researchers transferred the genome of the goat pathogen Mycoplasma mycoides—genetically engineered to be antibiotic resistant—into the cell of a closely related species, M. capricolum.

Initially, the M. capricolum bacterium contained two genomes: its own and that of M. mycoides. But after the cell divided, one daughter cell inherited one genome and the other got the foreign genome. Both populations were then exposed to antibiotics, leaving only the hybrid bacteria alive.

Let’s do it again

The researchers are unsure whether their results can be replicated with eukaryotic cells. “Our hunch is that one can make it work for other systems,” said study team member Clyde Hutchinson III. “But on the other hand, you can think of a lot of barriers.”

For one thing, both of the bacteria species used in the study don’t have cell walls, which could block DNA uptake. Also, many cells contain restriction enzymes that target and dice up alien DNA. But the two bacteria species used in the study are so closely related that their restriction enzymes treat the other’s DNA as their own.

The cells of other organisms might not be so forgiving. “For adding foreign DNA to each unique type of bacteria, understanding the restriction systems to overcome those will need to be accomplished for each unique cell type,” Venter said.“There’s no universal formula for doing this.”

Venter’s team aims to create a synthetic organism with the minimum set of genes necessary for life. This could help answer the question of what life is, they say, and additional genes could be added to the bare-bones genome to create customizable organisms with specialized skills, such as making biofuels from raw materials.

But George Church, a leading synthetic biologist at Harvard University, questions the impact the new findings will have on the field. “I think it’s not clear that it’s that important,” Church told LiveScience. “Synthetic biology is a very vibrant, active field, but almost nobody in it uses Mycoplasm.”

“Small is not always better. If I gave you a choice between a modern computer and ancient computer, it’s a no brainer,” Church said. “You have to have a really good excuse to go backwards to something that’s less complex. It’s not obvious and they’re making it sound like it’s obvious.”

“Almost nobody has a need where the whole genome is redone,” Church added. “Usually, they’re changing a small percentage, like one percent or less. And if you can just change one percent, why mess around with the other 99 percent? It’s got to cost more.”