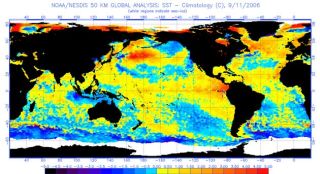 El Nino conditions have developed in the tropical Pacific and are likely to continue into early 2007, scientists announced yesterday.

El Nino is marked by warmer water in the Pacific off the coast of South America. It alters weather patterns in the United States and throttles hurricane formation in the Atlantic by pumping energy high into the atmosphere and fueling wind currents that cross the Americas and shear the tops off some Atlantic storms before they can develop into hurricanes.

Researchers had said in August El Nino might be forming; ocean temperatures increased remarkably in the equatorial Pacific during the last two weeks [map].

"Currently, weak El Nino conditions exist, but there is a potential for this event to strengthen into a moderate event by winter," said Vernon Kousky, NOAA's lead El Nino forecaster.

The shift helps explain why this Atlantic hurricane season has been less active than was previously expected, according to a NOAA statement.

But with El Nino weak, the effects on hurricanes are modest.