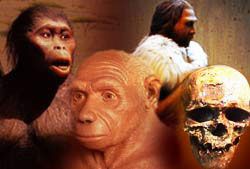 Neanderthals are often thought of as the stray branch in the human family tree, but research now suggests the modern human is likely the odd man out.

"What people tend to do is draw a line from our ancestors straight to ourselves, and any group that doesn't seem to fit on that line is divergent, distinct, unusual, strange," researcher Erik Trinkaus, an anthropologist at Washington University in St. Louis, told LiveScience today. "But in terms of evolution of our family tree, the genus Homo, we're the outliers and the Neanderthals are more toward the core."

Humans are not at the inevitable end of a sequence, Trinkaus said. "It just happens that we happen to be alive today and Neanderthals are not."

Trinkaus spent decades examining fossil skeletons and over time realized that maybe researchers looked at Neanderthals the wrong way. Over the last two years, he systematically combed through fossils, comparing Neanderthal and modern human skull, jaw, tooth, arm, leg traits with those of the earliest members of the genus Homo in terms of their shape.

Trinkaus focused on skeletal features that seemed most strongly linked to genetics, as opposed to any traits that might get influenced by lifestyle, environment or wear and tear.

When compared with our common ancestors, Trinkaus discovered modern humans have roughly twice as many uniquely distinct traits as Neanderthals. In other words, Neanderthals are more like the other members of our family tree than modern humans are.

"In the broader sweep of human evolution, the more unusual group is not Neanderthals, whom we tend to look at as strange, weird and unusual, but it's us, modern humans," Trinkaus said.

Trinkaus published his findings in the August 2006 issue of the journal Current Anthropology.