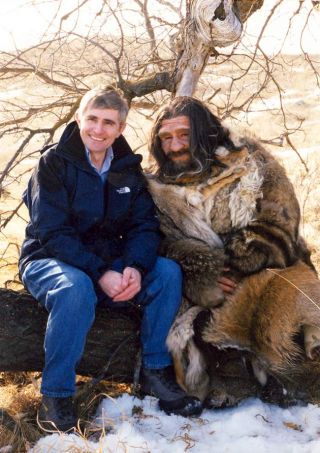 Professor Michael Bisson, archaeologist at Montreal's McGill University, sits with an actor playing the part of a Neanderthal on the set of the BBC documentary "Walking with Prehistoric Beasts," shot in 2001.
(Image: © Michael Bisson)

Depending on which journals you've picked up in recent months, early humans were either peace-loving softies or war-mongering buffoons.

Which theory is to be believed?

A little bit of both, says one archaeologist, who warns against making generalizations when it comes to our long and varied prehistory.

The newest claim concerns Australopithecus afarensis, who lived approximately five million years ago and is one of the first hominids that can be linked directly to our lineage with some certainty. Hardly an expert at tearing other animals limb from limb, scientists say the small and furry creature likely spent most of its time avoiding becoming the lunch of those saber-toothed mammals you see in natural history museums today.

That's a far cry from the spear-wielding image most of the public has of our earliest ancestors, Robert Sussman of Washington University told an audience at the annual meeting of the American Association for the Advancement of Science last month.

Other research appearing in current scientific journals, however, paints a different picture of early man.

Groups of humans likely engaged in occasional violent encounters in order to increase their territory, argues Raymond C. Kelly of the University of Michigan in a recent edition of the Proceedings of the National Academy of Sciences. According to Kelly, this may have continued up until about a million years ago, when distance weapons like the spear were invented and increased the risks of attacking other groups.

How can scientists see things so differently?

Human evolution just isn't that simple, says Michael Bisson, professor of anthropology at McGill University in Montreal, Canada. People tend to make generalizations about our early ancestors, even though they lived for a period of several million years and include many entirely different species of hominids.

As for the peaceful nature of Australopithecus afarensis, Bisson wholeheartedly agrees with Sussman.

"Afarensis was small and completely non-technological. No one has ever argued that they were predatory. They are bipedal, ground-eating apes," Bisson said in an interview.

Interpretations get trickier, however, as time moves forward and hominids become more prevalent and diverse. When humans began to eat meat and use weapons, around two million years ago, some inter-group killings were almost certainly going on in the cases where individuals encroached on each other's territory.

Still, at this point hominids are mostly timid scavengers, according to Bisson, not mammoth-hunters.

"The interesting thing about early hominids and meat-eating is that all of the evidence we have for it is little animals that might have been caught and dismembered by hand and big animals that were scavenged," he said. "It fades in very slowly. After two million [years ago], there's about a half-million-year transition before you get to hunting of some kind."

It's around this time where mistakes can be made in the fossil record, experts say. With humans beginning to hunt animals, weapons in hand, it's easier to assume they are also killing each other. Puncture wounds in a skull from an animal bite can be mistaken as injuries from a spear attack, for example.

The fossil record is not always an easy thing to read, Bisson explained.

"Cause of death is almost impossible to determine on all of these (fossils)," he said. "They have almost all been subject to scavenging. Since there's no deliberate burial at that time, the bodies end up part of the food chain, so we simply can't say what happened."

A lot can depend on how archaeological remains are interpreted. Sussman calls this the "5 o'clock news" version of history and science, one that applies to today's humans as easily as those of several million years ago.

"Human groups are much more likely to live in peace than in war," he explained. "What we usually find is that what is reported or emphasized is any violent encounter that takes place. Thus, instead of using the actual statistics, we emphasize the rare events."

Bisson agrees that the archaeological remains must be put in context depending on who makes the find, even. He pointed to the discovery of some Australopithecus remains in the 1920s, in what is now Botswana. Along with a skull, the material found included tools made from the bones of gazelles, antelopes and wild boar. The archaeologist working there mistakenly interpreted them as a cache of weapons, while later testing would show the points were used simply for digging in termite holes.

"A lot of this stuff was written between the First and Second World War," he reasoned. "It was very easy to see warfare and violence as inherent in the human condition during a period when humanity was literally trying to exterminate itself."

Mainstream media can also have a lot to do with what the public believes as fact.

"No archaeologist in the last 40 years has bought the ‘Killer Ape' interpretation, but it did get ingrained in popular culture in the intro sequence to the famous Stanley Kubrick film ["2001: A Space Odyssey"]," Bisson said. In the movie, ape-like humans are shown having the eureka moment that bones can be used as weapons, thus evolving to become hunters and killers. "It's a fairly literal dramatization of the hypothesis, complete with leg bones used as clubs."

Even if early humans were mostly cooperative with each other during the Paleolithic era—a period lasting about two million years—there is plenty of evidence to suggest that (like today), some people were just plain nasty. Cannibalism was clearly practiced in some areas, according to Bisson.

"We know that there is at least one case of Homo erectus with extensive cuts on the cranium indicating that the person was essentially scalped and the eyes gouged out," he said.