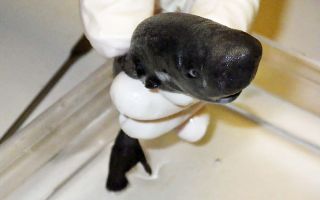 The newly identified American pocket shark was discovered in the Gulf of Mexico in 2010.
(Image: © Mark Doosey)

Tiny, blunt-headed sharks called pocket sharks are so rare that until just a few years ago, only one individual had ever been collected from the southeastern Pacific Ocean. And now, that lonely shark finally has company.

Researchers with the National Oceanic and Atmospheric Administration (NOAA) caught a second pocket shark in 2010 in the Gulf of Mexico. Scientists declared it to be a pocket shark in 2015, and after further analysis it was recently described as a new species.

Measuring only 5.5 inches (14 centimeters) in length, the wee male shark was identified as an American pocket shark and given the scientific name Mollisquama mississippiensis, according to a new study. [In Photos: Glow-in-the-Dark Sharks]

You might think that adorable pocket sharks are so named because they're small enough to fit comfortably in a pocket. However, the name comes not from their petite size but from a physical feature: a pocket-like orifice found near their pectoral fins.

Pocket sharks also have tapered bodies and endearingly wide, blunt heads "with a broadly rounded bulbous snout," the researchers reported. From certain angles, this makes the sharks look like very, very tiny sperm whales, according to the Live Science newsroom.

The only other pocket shark specimen in the world — a female — was caught in 1979 and is part of the collection at the Zoological Museum in St. Petersburg, Russia. But this new specimen has features that distinguish it from the female pocket shark. It has different teeth, 10 fewer vertebrae, a pit organ on its jaw and light-producing organs distributed on its stomach and back, the scientists wrote.

The unexpected discovery of this exceptionally rare animal hints that there is much to be learned, not only about these mysterious fish, but about the deep waters of the pocket sharks' habitat, said study co-author Henry Bart, director of the Tulane University Biodiversity Research Institute in Louisiana.

"The fact that only one pocket shark has ever been reported from the Gulf of Mexico, and that it is a new species, underscores how little we know about the Gulf — especially its deeper waters — and how many additional new species from these waters await discovery," Bart said in a statement.

The findings were published online June 18 in the journal Zootaxa.