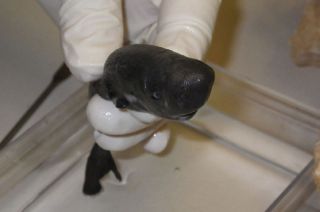 A newly identified pocket shark from the Gulf of Mexico is teensy, measuring some 5 inches (13 centimeters) long and weighing just a half ounce (14.6 grams).
(Image: © M. Doosey/Tulane University)

A juvenile male pocket shark has been discovered, making it the second of this type of shark ever recorded, scientists with the National Oceanic and Atmospheric Administration (NOAA) say.

The teensy shark, extending just 5.5 inches (14 centimeters) in length and weighing a mere half ounce (14.6 grams), was found in the Gulf of Mexico in 2010, though it was only recently identified, when Mark Grace, of NOAA Fisheries' Pascagoula, Mississippi, Laboratory, examined the specimen. The Gulf pocket shark is one of two such sharks ever reported.

"Discovering him has us thinking about where Mom and Dad may be, and how they got to the Gulf," Grace said in a statement. "The only other known specimen was found very far away, off Peru, 36 years ago." [See Photos of the Teensy Pocket Shark]

Grace discovered the shark in holdings at the Pascagoula lab. Scientists had collected the specimen, which was found to be dead when sorted from the rest of the catch, from the deep sea about 190 miles (305 kilometers) offshore Louisiana in 2010. At that time the researchers identified the animal only as a member of the Dalatiidaefamily of sharks, which includes pocket sharks, Grace told Live Science. Before that collection, the only other specimen of pocket shark came from a female shark collected in 1984 in the Nazca Submarine Ridge in the southeast Pacific Ocean.

Though the shark could indeed fit into one's pocket, the researchers noted its tiny body isn't the source of the group's common name; rather, an orifice, or pocket, located just above its pectoral fin inspired the moniker. The orifice of the Gulf shark's pocket gland is 0.2 inches (4.2 millimeters) across.

A genetic analysis of a tissue sample from the Gulf shark suggested it belongs in the Mollisquama genus, and that pocket sharks are closely related to the kitefin and cookie cutter shark species, which are also part of the Dalatiidaefamily.

To figure out the species, Grace and his colleagues compared the newly identified specimen with written descriptions and photos of the one collected in 1984, identified as M. parini.

They found differences in appearance between the two sharks, including features of the animals' teeth and the number of vertebrae; in addition, the Gulf shark sports a cluster of light-emitting organs on its belly, something not seen or described in M. parini, the researchers noted in the Zootaxa journal article, published April 22, describing the newbie.

Those differences could also be the result of the sharks being different sexes and ages, as the female pocket shark was an adult. As such, researchers have placed the newbie into the Mollisquama genus without labeling its species.

Scientists are unsure the exact function of this pocket gland, though in 1984, scientists posited that the opening served to secrete pheromones for mate attraction. Another idea, Grace said, is that the orifice acts as a source of luminescence. The Mollisquama pocket looks similar to the so-called luminous abdominal pouch on the dalatiid shark Euprotomicroides zantedeschia; that pouch may secrete a luminous fluid to attract prey or mates, or to elude predators, scientists have speculated.

The Gulf shark specimen is now part of the Royal D. Suttkus Fish Collection at Tulane University's Biodiversity Research Institute in Belle Chasse, Louisiana. Others who contributed to the study of this shark include researchers at the Smithsonian National Museum of Natural History in Washington, D.C., and American Natural History Museum in New York City.