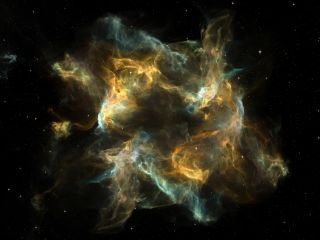 The vast voids between galaxies can stretch millions of light-years across and may appear empty. But these spaces actually contain more matter than the galaxies themselves.

"If you took a cubic meter, there would be less than one atom in it," Michael Shull, an astronomer at the University of Colorado Boulder, told Live Science. "But when you add it all up, it's somewhere between 50 and 80% of all the ordinary matter out there."

So, where did all this matter come from? And what's it up to? [What Happened Before the Big Bang?]

The matter between galaxies — often called the intergalactic medium, or IGM for short — is mostly hot, ionized hydrogen (hydrogen that has lost its electron) with bits of heavier elements such as carbon, oxygen and silicon thrown in. While these elements typically don't glow bright enough to be seen directly, scientists know they're there because of the signature they leave on light that passes by.

In the 1960s, astronomers first discovered quasars — incredibly bright and active galaxies in the distant universe — and shortly thereafter, they noticed that the light from the quasars had missing pieces. These pieces had been absorbed by something in between the quasar and the astronomers' telescopes — this was the gas of the IGM. In the decades since, astronomers have discovered vast webs and filaments of gas and heavy elements that collectively contain more matter than all the galaxies combined. Some of this gas was likely left over from the Big Bang, but the heavier elements hint that some of it comes from old stardust, spewed out by galaxies.

While the most-remote regions of the IGM will be eternally isolated from neighboring galaxies as the universe expands, more "suburban" regions play an important role in galaxy life. The IGM under the influence of a galaxy's gravitational pull slowly accumulates onto the galaxy at a rate of about one solar mass (equal to the mass of the sun) per year, which is about the rate of star formation in the disk of the Milky Way.

"IGM is the gas that feeds star formation in galaxies," Shull said. "If we didn't still have gas falling in, being pulled in by gravity, star formation would slowly grind to a halt as the gas [in the galaxy] gets used up."

To probe the IGM, astronomers also have started looking at fast radio bursts that come from distant galaxies. Using both this technique and by examining quasar light, astronomers continue to study the characteristics of the IGM to determine its varying temperatures and densities.

"By measuring the temperature of the gas, you can get a clue as to its origins," Shull said. "It allows us to know how it got heated and how it got there."

Although gas is pervasive between galaxies, it isn't the only thing out there; astronomers have also found stars. Sometimes called intergalactic or rogue stars, these stars are thought to have been flung from their birth galaxies by black holes or collisions with other galaxies.

In fact, stars sailing the void might be fairly common. A 2012 study published in The Astrophysical Journal reported more than 650 of these stars at the edge of the Milky Way, and by some estimates, there could be trillions out there.

"Our results with the Cosmic Infrared Background Experiment suggest that as much as half of the light from stars is sourced by stars outside of galaxies, but I would say that's not currently a widely accepted view," Michael Zemcov, an astronomer at the Rochester Institute of Technology who published the results in a 2014 paper in the journal Science, told Live Science "[How many intergalactic stars there are] is an open question."