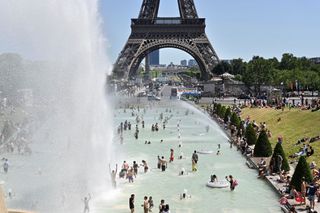 People cool down in the fountains of Trocadero near the Eiffel Tower during a heatwave in Paris, France on June 29, 2019. June 2019 was the hottest June on Earth ever recorded.
(Image: © Mustafa Yalcin/Anadolu Agency/Getty Images)

If you thought last month felt really, really hot, you were right. June 2019 was the hottest June on record for the globe. And, it was the second month in a row that balmy temperatures caused Antarctic sea ice coverage to reach a record low.

The sizzling average land and sea temperature of June 2019 was 1.71 degrees Fahrenheit (0.95 degrees Celsius) above the global average temp of 59.9 F (15.5 C), making June 2019 the hottest June in 140 years, according to the National Oceanic and Atmospheric Administration's (NOAA) National Centers for Environmental Information. Nine of the top 10 hottest Junes have occurred since 2010.

In the U.S., Alaska had its second-warmest June since the state started keeping records in 1925. And although the Hawaiian islands are pretty much always balmy, the tropical region experienced its hottest June this year as well. The same goes for the Gulf of Mexico. [The Reality of Climate Change: 10 Myths Busted]

Europeans sweated more than normal last month, too, having experienced the region's hottest June on record as a whole. Austria, Germany and Hungary each recorded their hottest June ever, and Switzerland had its second hottest.

Are these record high temperatures a result of climate change? Yup.

"Climate is, by definition, the long-term average of weather, over many years," Josef Werne, a professor of geology and environmental science at the University of Pittsburgh, previously told Live Science. "One cold (or warm) year or season has little to do with overall climate. It is when those cold (or warm) years become more and more regular that we start to recognize it as a change in climate rather than simply an anomalous year of weather," he said.

As extreme heat waves happen more often across the globe, and Earth's temperature continues to rise, it's getting harder to ignore the unpleasant effects of climate change. A study published in June in the journal Nature Climate Change found that the scorching trend is likely to continue every year if no action is taken to reduce greenhouse gas emissions.