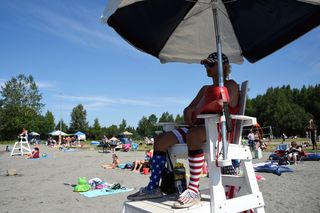 That sweltering temperature, recorded yesterday (July 4), meant that the normally snowbound city, which is just 370 miles (595 kilometers) from the Arctic Circle, was hotter than New York City. (NYC hit 85 F yesterday, according to timeanddate.com.)

The previous record-breaking temperature in Anchorage was 85 F (29 C), which occurred June 14, 1969, according to KTUU, an Anchorage broadcast station affiliated with NBC News. Yesterday's 90 F (32 C) was recorded at Merrill Field station in Anchorage, according to the National Oceanic and Atmospheric Administration (NOAA). [On Ice: Stunning Images of Canadian Arctic]

The cause of the sweltering weather in Alaska? An intense high-pressure system, which the Washington Post's Capital Weather Gang termed a "heat dome," has parked itself over the region. The heat is not expected to let up for days, with the weather gang forecasting above-normal temperatures through July 8.

From a broader perspective, above-average temperatures in Alaska are partly due to a loss of sea ice in the Arctic and the concurrent ocean warming there, Rick Thoman, a climate specialist with the Alaska Center for Climate Assessment and Policy, told France's AFP in March. At the time, Alaska was experiencing two months of record-shattering temperatures.

Climate change is having disproportionate effects in the Arctic, which is heating up twice as fast as the rest of Earth, Live Science previously reported. That's because of a positive feedback loop there: Sea ice and snow reflect a lot of the sun's radiation back into the atmosphere. But as more of those reflective surfaces melt to reveal the darker (light-absorbing) water beneath, more heat gets locked into the water rather than bouncing back to space, making it hotter … and causing more melt and more warming.