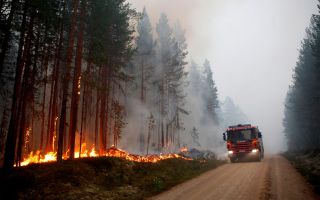 A fire vehicle is seen as fire burns in Karbole, Sweden, on July 15, 2018. The unusually hot and dry weather is helping fuel dozens of fires in the country.
(Image: © Mats Andersson/AFP/Getty)

An intense heat wave is fueling wildfires across an enormous swath of northern Europe, with at least 11 fires raging within the Arctic Circle, reported The Guardian.

Sweden is the worst-hit country, with at least 40 fires burning as of Wednesday, Time reported.

Multiple communities have been evacuated, and thousands of people have been directed to stay indoors with their vents and windows closed to avoid harmful smoke inhalation.

"This is definitely the worst year in recent times for forest fires," Mike Peacock, a university researcher and local resident, told The Guardian. "Whilst we get them every year, 2018 is shaping up to be excessive," he said. [Wildfires Blaze in Northern California (Photos)]

European officials have stated that the risk of more fires continues as long as temperatures stay above 86 degrees Fahrenheit (30 degrees Celsius) — and that such warm weather is in the forecast for the coming days. Several Arctic-area locations have experienced record-high temperatures this year. Helsinki hit 86 degrees F (30 degrees C) for the first time in eight years, and the northernmost city in Finland, Utsjoki, experienced an all-time record high this summer of 92 degrees F (33.3 degrees C), The Weather Channel reported.

Climate scientists have said that the Arctic and other areas that once experienced very little fire activity are becoming more vulnerable to wildfires, The Guardian reported.

"What we're seeing with this global heat wave is that these areas of fire susceptibility are now broadening, with the moors [open land] in northwest England and now these Swedish fires a consequence of that," Vincent Gauci, a professor of global climate change ecology at The Open University in the United Kingdom, told The Guardian. "When such carbon-dense ecosystems experience aridity and heat and there is a source of ignition — lightening or people — fires will happen," said Gauci.