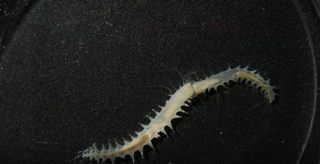 Tiny, feisty worms that live off the coast of Japan fight by headbutting each other — and they aren't quiet about it. During these feuds, the worms emit one of the loudest sounds in the ocean, according to a new study.

The source of the underwater hullabaloo is a nearly transparent segmented worm called the Leocratides kimuraorum, which lives inside sponges 279 to 554 feet (85 to 169 meters) deep off the coast of Japan. [The 12 Weirdest Animal Discoveries]

These wigglies are just a tad more than an inch (29 millimeters) long and have lengthy tentacles and a big mouth (literally). These seemingly quiet creatures revealed their true nature under the spotlight in the lab. A group of researchers used an instrument called a hydrophone to record 15 pops that were emitted from three kimuraorums as they were fighting.

In a marine feud researchers dub "mouth-fighting," the worms approached each other headfirst with their mouths open. During such encounters, the worms' pharynx muscles expand rapidly, creating a cavitation bubble that collapses and produces a loud "pop" while the worms launch into each other.

The researchers found that these pops can reach 157 decibels in the water (which is a different measurement than decibels in the air). From right next to the water tank, the pops sounded like humans snapping their fingers, lead author Goto Ryutaro, an assitant professor at Kyoto University told Live Science. "Though they probably sound louder if you hear them in the water."

The worms are as loud as snapping shrimps, which are one of the biggest noisemakers in the ocean, the authors wrote. What's more, they found that these worms did not make any noise when simply disturbed, they only did so when they were fighting.

They "may use mouth-fighting to defend territory or living chambers from other worms," the authors wrote July 8 in the journal Current Biology. "A loud pop may be a byproduct of the rapid mouth attack, but it may also aid intraspecific communication." A loud noise could somehow determine the victor of the fight or even reveal the whereabouts of nearby worms, they wrote.