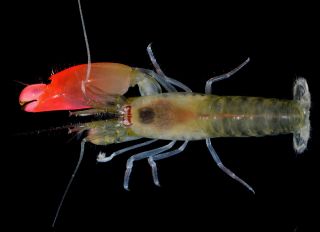 A new species of pistol shrimp — small, burrowing crustaceans with one oversize claw — doesn't live on the dark side of the moon, nor is it a lost soul swimming in a fishbowl.

Nevertheless, the researchers who described the shrimp proposed a name for the new species that is inspired by moody British rockers Pink Floyd, who just happened to be the scientists' favorite band.

Dubbed Synalpheus pinkfloydi, the shrimp lives in waters off the Pacific coast of Panama, and the crustacean sports a large snapping claw colored a brilliant pink, which was what prompted the researchers' name choice. [StarStruck: Species Named After Celebrities]

The new species was found living among dead corals and in rocky crevices on the sea bottom. Its body measures about 0.2 inches (5.5 millimeters) in length, and is smooth and semitransparent with a greenish tinge, except for the colorful large claw, which is "an intense, almost glowing pink-red," the study authors wrote.

But the Pink Floyd pistol shrimp's claw isn't just a pretty ornament. Pistol shrimp — also known as snapping shrimp — earned their name from an unusual behavior, using those extra-large claws to make a very big noise. By quickly closing their giant claws, the shrimp produce a tiny, high-pressure bubble and then pop it, generating a tiny sonic boom loud enough to stun fish so that the shrimp can catch and eat them, according to the National Oceanic and Atmospheric Association (NOAA).

The snap of the imploding bubble is distinctive, and when a number of snapping shrimp gather together, the noise can be loud enough to interfere with underwater communications networks and scientific research, according to a report on underwater noise published in April 1946 by the University of California's Division of War Research. The report described the din emanating from a colony of pistol shrimps' snapping claws as "an intense crackling noise resembling the burning of dry twigs," fading somewhat with distance to "a sizzle or a hiss."

And like their noisemaking namesake shrimp, the band Pink Floyd was also thought to be capable of stunning and killing fish with the sheer volume of their music.

At a concert performed in London in the 1970s, the "crushing decibels" of Pink Floyd's tunes and pyrotechnic displays purportedly killed all of the fish in a nearby pond, Time magazine reported in 1980.

The findings were published online April 11 in the journal Zootaxa.