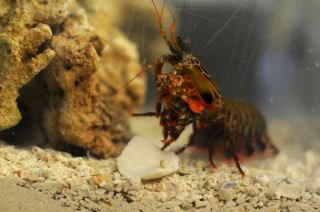 The weapon with which mantis shrimp attack their prey, including mollusks and crabs, is no ordinary appendage. This clublike claw accelerates faster than a .22-calliber bullet, delivers an impact more than 1,000 times the shrimp’s own body weight, and stays intact even after thousands of blows.

In fact, researchers found in recent tests that a shrimp-inspired material design proved tougher and more impact-resistant than a standard material structure used in the aerospace industry.

"The more we study the club of this tiny crustacean, the more we realize its structure could improve so many things we use every day," study researcher David Kisailus, a professor of engineering at the University of California, Riverside, said in a statement. [Photos: Mantis Shrimp’s Googly Eyes]

In previous work, Kisailus and his colleagues examined the structure of the club and found an endocuticle region in which mineralized fibers are arranged in layers and act as a shock absorber. Each layer is rotated slightly compared to the one below, creating a spiraling, or helicoidal, pattern.

The researchers created carbon fiber-epoxy composites containing layers at three different helicoidal angles. Then, using a drop weight system similar to the kind used for materials testing in the aircraft industry, they tested the shrimp-inspired composites against two control materials. One control contained layers with fibers running parallel to one another and the second control contained layers in an alternating configuration used in the aerospace industry.

The shrimp-inspired materials fared better than either control in the impact, compression and ultrasound testing, the researchers reported in an article published online last month in the journal Acta Biomaterialia.