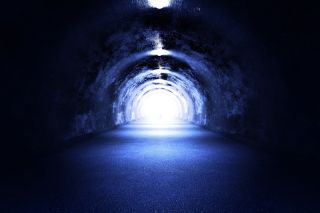 About 10% of people report having mystical "near-death experiences," such as out-of-body sensations, according to a new study involving participants from nearly three dozen countries.

What's more, although the exact cause of these experiences remains a mystery, the authors say the phenomenon may be tied to certain sleep abnormalities.

The study findings suggest there may be a connection between near-death experiences and disorders of REM sleep, a phase of the sleep cycle in which dreaming is vivid and people are typically paralyzed. The researchers found that near-death experiences were more likely to occur in people who also reported symptoms of REM sleep disorders, such as sleep paralysis (when people feel conscious but can't move) or hallucinations just before falling asleep. [Top 11 Spooky Sleep Disorders]

One hypothesis is that the brains of people who have these experiences may blend two types of consciousness — waking and dreaming states, according to a researcher not involved in the new study.

Still, the new study only showed an association and cannot prove that such disorders — which the researchers refer to as "REM sleep intrusion into wakefulness" — can cause near-death experiences. But "identifying the physiological mechanisms behind REM sleep intrusion into wakefulness might advance our understanding of near-death experiences," study lead author Dr. Daniel Kondziella, a neurologist at the University of Copenhagen, said in a statement.

The study was presented on Saturday (June 29) at the European Academy of Neurology Congress in Oslo, Norway. It has also been posted to the preprint website bioRxiv. It has not yet been published in a peer-reviewed journal.

Reports of near-death experiences go back centuries, but exactly how common such experiences are in the general population was unclear.

In the new study, the researchers analyzed information from 1,034 people in 35 countries, who were recruited using an online crowdsourcing platform called Prolific Academic, which pays people to participate in research.

The most commonly reported symptoms during a near-death experience were abnormal time perception, exceptional speed of thought, exceptionally vivid senses and feeling separated from their body.

One woman reported that during childbirth, "I felt like I just died and I went to heaven. I heard voices, and I was sure I would not come back to my life. It was weird. I could not control my body."

Another participant, who reported near-drowning, said, "I felt like my soul was being pulled out of my body. I was floating and was [lifted in the air]."

In other words, people with near-death experiences may have "a different kind of brain switch that blends waking and REM consciousness [i.e., dreaming]," said Dr. Kevin Nelson, a professor of neurology at the University of Kentucky, who wasn't involved with the new study but who has also investigated the link between near-death experiences and REM sleep intrusion. Such blending may be the brain's reaction during a crisis of near death, Nelson said.

However, exactly what causes near-death experiences is unknown and controversial. Some studies suggest they may be triggered by a spike in electrical activity in the dying brain. Other studies suggest that oxygen deprivation may play a role.

And some researchers say there may be more going on than science can currently explain. For example, a study published in 2014 in the journal Resuscitation found that about 2% of people who had experienced a cardiac arrest could recall things going on around them at the time their heart had stopped, when they shouldn't have had any measurable brain function; and these accounts were verified by medical staff.

Dr. Sam Parnia, director of Critical Care & Resuscitation Research at NYU Langone Health and lead author of the 2014 study, was skeptical of the new study's results. Parnia noted that the original definition of a near-death experience relates to experiences in people who are critically ill, which was not the case for many of the study participants.

"People can have experiences that have similar features to NDE's — such as any type of mystical experience — but those are not NDE's," Parnia told Live Science.

Moreover, Parnia emphasized that the link found in the current study doesn't prove cause and effect. For example, both REM sleep disorders and near-death experiences may be more common in people with underlying medical conditions, such as heart disease; but the study authors did not take underlying conditions into account in their analysis, he said.

Finally, the results don't explain why some people are able to recall near-death experiences from a time when their brain is shut down, such as during a cardiac arrest. "These refer to consciousness even when the brain doesn't work, which is a paradox," Parnia said.

Still, even if near-death experiences do have a biological explanation, it does not undermine their spiritual impact, Nelson said. "Clinicians must welcome near-death accounts with non-judgmental reassurance, providing safe harbor for patients with experiences that often bring overwhelming passions and memories," Nelson wrote in a 2015 paper published in the journal Missouri Medicine.