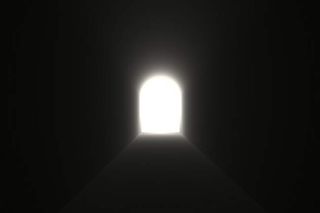 Many people report seeing a bright light at the end of a long dark tunnel after a near-death experience.
(Image: © Dreamstime)

People who report near-death experiences have elevated levels of carbon dioxide in their blood and may be suffering oxygen deprivations, according to a new study published in the medical journal Critical Care.

The study, by Slovenian researchers, examined 52 heart attack patients in three large hospitals. Of those, 11 reported having near-death experiences (NDEs), such as movement toward a bright light, feelings of peace and joy, and profoundly spiritual moments during their heart attacks. Studies suggest that between 10 percent and 25 percent of heart attack survivors report NDEs.

Exactly why has remained a mystery, but the new study provides a clue. The link between oxygen deprivation in the brain and near-death experience has been suggested for many years. British researcher Dr. Susan Blackmore, author of "Dying to Live: Near-Death Experiences" (Prometheus Books, 1993), notes that many NDEs (such as euphoria and the feeling of moving toward a white light) are in fact typical symptoms of oxygen deprivation.

Heart attacks occur when the supply of blood is blocked from the heart. The heart stops circulating blood, and as a result the brain is deprived of oxygen while carbon dioxide increases. Carbon dioxide is toxic in high concentrations, starting at about 1 percent of the inhaled air (10,000 parts per million). For comparison, the gas occurs naturally in a concentration of about 0.039 percent of the atmosphere, though it varies according to altitude, season, and other factors.

Not only are the symptoms of anoxia (oxygen deprivation) very similar to the symptoms of an NDE, but patients who had the highest concentrations of carbon dioxide in their blood reported significantly more NDEs than those with lower levels.

In response to the stress of the heart attack, pain-killing endorphins are released, which can create elation and hallucinations.

Several drugs have also been found to cause near-death or out-of-body experiences, including ketamine (a hallucinogen similar to PCP, used mainly as an anesthetic). Though many believe that near-death experiences provide evidence of life after death, the fact that they can be chemically induced suggests a natural—instead of supernatural—cause.

Benjamin Radford is managing editor of the Skeptical Inquirer science magazine and author of the upcoming book Scientific Paranormal Investigation. His books, films, and other projects can be found on his website. His Bad Science column appears regularly on LiveScience.