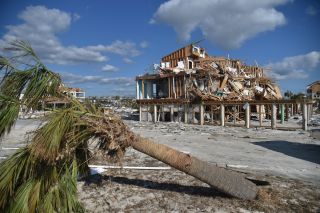 Hurricane Michael wreaked havoc in Mexico Beach, Florida, in October 2018, which made landfall there as a Category-4 hurricane.
(Image: © Hector Retamal/AFP/Getty Images)

Scientists are predicting a near-normal Atlantic hurricane season this year, with two to four major hurricanes reaching at least Category 3 status, with winds of 111 mph (178 km/h) or higher, the National Oceanic and Atmospheric Administration (NOAA) announced today (May 23).

But this "near-normal" description doesn't mean people in the U.S. Southeast and Eastern Seaboard can rest easy.

"That's a lot of activity," Gerry Bell, the lead hurricane season forecaster with NOAA's Climate Prediction Center, told reporters at a news conference today. "You need to start getting ready for the hurricane season now." [The 20 Costliest, Most Destructive Hurricanes to Hit the US]

The 2019 Atlantic hurricane season — which lasts from June 1 to Nov. 30 — is expected to have between nine and 15 named storms, which means they pack winds of 39 mph (62 kilometers/hour) or higher, NOAA reported. Of those, between four and eight could become hurricanes, meaning their winds reach speeds of 74 mph (119 km/h) or higher.

Although just four of these hurricanes may top Category 3 status, "it only takes one land-falling hurricane to cause great destruction to a community," Daniel Kaniewski, the acting deputy administrator at the Federal Emergency Management Agency (FEMA) told reporters.

However, it's impossible to know whether any of the storms or hurricanes predicted for the 2019 season will make landfall, said Neil Jacobs, acting NOAA administrator.

The officials added that this year marks the first time NOAA's fleet of Earth-observing satellites, including three operational next-generation satellites, were used to gather data for the hurricane forecast models. This data also helped NOAA issue a storm prediction for the eastern and central Pacific basins. According to NOAA, the Pacific should expect an above-normal season with 15 to 22 named storms, of which eight to 13 are expected to become cyclones (the term given to "hurricanes" in these parts of the Pacific). Of these, between four and eight could be major cyclones, NOAA reported.

What forces are involved?

A near-normal Atlantic hurricane season may sound surprising, given that there is an ongoing El Niño this year — a climate phenomenon known for warming waters in the equatorial Pacific Ocean that can impact weather worldwide. El Niño also acts to increase wind shear in the Atlantic, which disrupts the flow of heat and moisture, ingredients needed for hurricanes to form.

But this year's El Niño is weak, and it's competing with the other climate factors. These hurricane-favoring factors are warmer-than-average sea-surface temperatures in the tropical Atlantic Ocean and Caribbean Sea (a pattern seen since 1995) and a strong monsoon in West Africa, Bell said. "They favor more activity," Bell said.

People in hurricane-prone areas should make emergency plans now, Kaniewski said. This includes getting enough supplies — such as food, water and medicine — to last at least 72 hours, he said. In the event of a powerful storm or hurricane, people should also expect major communication networks to go down, so they should have a battery-powered radio to stay updated and have an emergency evacuation route in mind, he added.

Kaniewski also encouraged people to have cash on hand, in case the electricity goes out and ATMs and credit card swipe machines fail, as well as homeowners' and flood insurance. To learn more, download the free FEMA application, which provides a number of services, including weather alerts, lists of open shelters and advice on emergency preparedness.