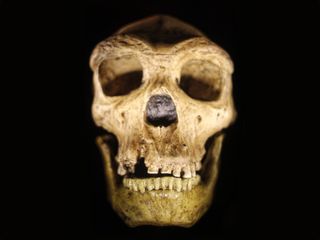 Here, a cast from a reconstructed Neanderthal skull. Researchers just examined tooth shape among Neanderthals, humans and our close relatives to figure out when the groups diverged.
(Image: © Getty Images)

Modern humans and Neanderthals may have diverged at least 800,000 years ago, according to an analysis of nearly 1,000 teeth from humans and our close relatives.

This new estimate is much older than previous estimates based on ancient DNA analyses, which put the split between humans and Neanderthals as happening between 500,000 and 300,000 years ago.

However, while outside researchers called the new dental analysis impressive, they note that it's based on one big assumption: that tooth shape evolves in a steady fashion, especially in Neanderthals. If tooth shape doesn't evolve at a steady rate, then "the construction of this paper collapses," said Fernando Ramirez Rozzi, director of research specializing in human evolution at France's National Center for Scientific Research in Toulouse, who was not involved in the study. [Photos: See the Ancient Faces of a Man-Bun Wearing Bloke and a Neanderthal Woman]

That said, it is quite possible that teeth (and Neanderthal teeth in particular) do evolve at a predictable rate, meaning the new study's calculation might be on target. "At the moment, there is the idea of a steady evolutionary rate change in the shape of cheek-teeth," Ramirez Rozzi said.

The researchers examined 931 teeth belonging to a minimum of 122 individuals from eight groups, including humans and our close relatives. Of those, 164 of the teeth were from the early Neanderthals from the Sima de los Huesos ("Pit of the Bones") site in Spain, a sample that includes almost 30 individuals that lived about 430,000 years ago, during the middle Pleistocene epoch.

By comparing the differences in tooth shape between samples, study researcher Aida Gómez-Robles, a paleoanthropologist at University College London, was able to calculate the evolutionary rates for dental shape change and then estimate the divergence time from the last common ancestor between humans and Neanderthals.

The result — that Neanderthals and modern humans probably diverged more than 800,000 years ago — shows that the last common ancestor of these two groups is probably not Homo heidelbergensis, as some scientists think.

"H. heidelbergensis cannot occupy that evolutionary position because it postdates the divergence between Neanderthals and modern humans," Gómez-Robles told Live Science in an email. "That means that we need to look at older species when looking for this common ancestral species."

The finding also "has profound implications for the way we interpret the fossil record and the evolutionary relationships between species," Gómez-Robles said.

Pushing back the divergence between Neanderthals and modern humans "is opening a new door" because it suggests that the two groups were distinct for much longer than previously thought, Ramirez Rozzi said.

"In other words, almost 1 million years of evolution was not enough to establish barriers (genetic, endocrinological, behavioral, etc.) to separate definitively these two species?" he asked.

The argument is laid out well by Gómez-Robles, who is "a well-known specialist of the Neanderthal lineage dental morphology," said Bruno Maureille, director of research at the National Center for Scientific Research (CNRS), in Paris, who was not involved in the study.

But, it appears that the dental remains of Neanderthals from different pockets of Europe each have "their own particularities," Maureille told Live Science. "Can we simply try to draw such global scenarios? [I'm] not so sure."

The study was published online May 16 in the journal Science Advances.