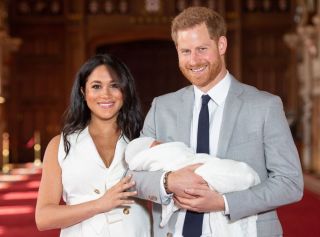 The name Meghan, with an "h," moved up to slot 703 on the top baby name list, after languishing below the top 1,000 for years.
(Image: © DOMINIC LIPINSKI/AFP/Getty Images)

The annual results are in, and Emma and Liam again top the list of the most popular baby names in America.

But while these two names have been ruling the roost for several years running, there is a lot less consensus in American naming practices than the top-10 ranking would indicate, said Laura Wattenberg, who runs the website namerology.com and authored the book "The Baby Name Wizard: A Magical Method for Finding the Perfect Name for Your Baby" (Harmony, Revised Edition, 2013).

The fastest-rising name of the year, Wattenberg said, is actually Zhavia, which was not even in the top 2,000 before rising to become the 877th on the Social Security Administration (SSA) list, which is released each year in May. [10 Popular Baby Names and What They Mean]

"In some ways, [Zhavia] is more representative of what's going on with American names than Emma is," Wattenberg said.

Emma has been the most popular girl's name in the United States since knocking Sophia from the top spot in 2015, according to SSA data. Likewise, Liam has also been a multiyear favorite for American parents. The name has exploded in popularity over the past decade, rising from 75th on the list in 2008 to sixth by 2012 and first in 2017.

Both Liam and Emma are what Wattenberg calls "raindrop names," which are short names dominated by vowel sounds. These names have been popular with parents in recent years, Wattenberg said, and are becoming even more so. Two other examples, Mila and Luna, rose rapidly toward the top of the list this year: Mila, from 30th to 14th in popularity; and Luna, from 37th to 23rd. [25 Scientific Tips For Raising Happy (and Healthy) Kids]

For boys, Noah and William filled out the top three, followed by James, Oliver, Benjamin, Elijah, Lucas, Mason and Logan. Lucas is a new addition to the boys' top-10 list, having hovered at No. 11 in 2017.

Americans tend to name more for sound and style than for association with celebrities or pop-culture characters, Wattenberg said, but the 2018 data held some surprising exceptions. The fastest-rising name, Zhavia, comes from Zhavia Ward, an 18-year-old singer from California. Even more shocking, the name Meghan (with an H) roared to 703 on the charts after languishing below the top 1,000 for years. (In 2017, the name ranked 1,407th in popularity.)

No other spelling of Meghan became more popular, Wattenberg said. The association was clear: More Americans named their babies Meghan because of Meghan Markle, the American actress who married into the British royal family in 2018.

"Making a name that sounds like a 'mom' name come back isn't easy," Wattenberg said.

The royal association adds an interesting twist to Meghan-with-an-H's history. The original spelling of Megan comes from Wales, Wattenberg said, where it was a diminutive for Margaret. The spelling with an H comes from the 1977 novel "The Thorn Birds," which features a character of Irish descent named Meghann. The author simply altered the Welsh name with a pseudo-Irish spelling, Wattenberg said. "The Thorn Birds" was a best-seller, and a 1983 miniseries based on the book was a huge hit; slightly-Irish spellings of Meghan suddenly became popular for American babies.

The 2018 name data contained another surprise, Wattenberg said: No one appears to have been inspired to name their baby T'Challa, the name of the protagonist of the hit Marvel movie "Black Panther." Normally, Wattenberg said, big pop-culture moments do move baby names. Even Thanos, the genocidal villain of the new Avengers films, lent his name to 13 American babies in 2018.

"I was amazed that 'Black Panther' had no effect on baby names," Wattenberg said.