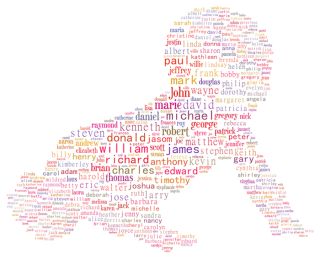 What does the name Alessandro have that Howard doesn't? With its double S's and Greek origin, it's just sexier, according to an online survey on male and female names.

Over the past five years, Laura Wattenberg, founder of BabyNameWizard.com — a website popular among expectant parents, performers and authors looking for names — asked tens of thousands of visitors to rate names for sexiness. Users could choose any of the roughly 40,0000 names in the site's "Namipedia" that sent their hearts afire, and rate it on a scale of 1 to 100.

"We wanted to be able to give our visitors a sense of how the name plays to other people," said Wattenberg, author of "The Baby Name Wizard" (Three Rivers Press, 2013). "We all carry around our own images of names based on our own personal experience. It's nice to get a different perspective without, say, running a poll." [Sophia's Secret: The 10 Most Popular Baby Names]

The top 10 contenders for boys' and girls' names shared a number of sexy characteristics, Wattenberg wrote in her blog, published yesterday (Feb. 23).

"One thing that leaps out at you is that we do have a mostly American and English-speaking user base, and Americans still have the image of the Latin lover," Wattenberg told Live Science. "These names are Italian and Spanish and French. You can even go Russian, with Dmitri."

Exotic names have "an element of fantasy," Wattenberg said. "These are the names that get chosen for lingerie brands, for instance, or for perfumes."

Chanel is likely a tip of the hat to Coco, and fashion models may have inspired Paulina, she said. The names also come from romances, such as Shakespeare's "Romeo and Juliet." Rhett and Scarlett are right out of the pages of Margaret Mitchell's "Gone With The Wind." (Not to mention, Esquire's "sexiest woman alive" award has twice gone to actress Scarlett Johansson.)

"A double letter was rated sexier than a single letter," Wattenberg said. "Adriana with one 'N' didn't rate quite as highly as with two 'N's.'"

It's unclear why that's the case, but the added length may lend it more elegance, she said. Or, maybe a pair of double L's or T's looks like a long pair of legs, she said.

Whatever the reason, it may help parents decide how to spell a child's name. "It suggests that there's going to be a different perception of those two spellings," Wattenberg said.

The lowest-ranked names for sexiness were as follows:

The boys' and girls' names appear to be unsexy for different reasons. Bob is a perfectly fine name, but it's so ordinary that many people may not see it as exciting and romantic, Wattenberg said.

The girls' names tend to feel old and clunky. "They all have very high 'Scrabble' values, but today's style in names is very light, full of vowels, very smooth," Wattenberg said. The double consonants in the middle of some — Gertrude and Mildred for example — sound heavy, she added.

But the survey is far from conclusive. Visitors at Baby Name Wizard can also rate how smart, sophisticated, friendly and creative names sound, but the site doesn't collect demographic data on the users. Plus, people can vote on as many names as they please.

To gain traction, each contender had to be rated by a minimum of 150 users. Most of the users are women, who likely have different ideas of sexiness than men, she said. For instance, a 2005 study found that simple one-syllable boys' names, such as Tom and Mark, did well with a gay male audience, she wrote on her blog.

So, why might people want a sexy name? "Naming is dreaming," Wattenberg said. "It's the part of preparing for parenthood where you're looking not just to six months in the future, but six years or 60 years in the future, and who you want your child to be."