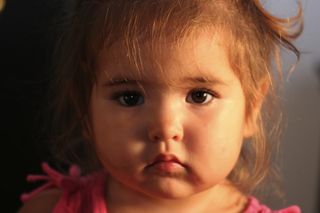 When it comes to names, everybody's got an opinion. But while figuring out what names people like is pretty simple -- the U.S. Social Security Administration keeps a list of the most popular baby names each year -- figuring out what people hate is trickier.

It turns out that in the case of names, love and hate aren't mutually exclusive. A new informal survey of the most disliked names in America finds that popularity often breeds backlash, as a quick track to baby-name fame seems to also trigger hate for that name. Among the most-hated "trendy" names are Jayden, Brayden, Madison and Addison.

"Nevaeh in particular seems to stand as this symbol … for what people don't like in modern baby names," Laura Wattenberg, author of "The Baby Name Wizard: A Magical Method for Finding the Perfect Name for Your Baby" (Three Rivers Press, 2005), told LiveScience.

The most hated baby names

Wattenberg did the informal survey of hated names for her blog, The Baby Name Wizard. She scoured general-interest message boards online, looking for conversations about baby names that make people cringe. She included only two message boards that were specifically for baby names, because name enthusiasts tend to know trends and might skew the results. The other boards included a motorcycle travel forum, a video game fan board and several parenting forums. The participants skewed female and under the age of 60, Wattenberg said. All told, more than 1,500 names were cited. Wattenberg calculated which names came up the most. [See the list of most hated boy and girl names]

Wattenberg is quick to point out that the survey isn't scientific, but it does have the advantage of capturing the names people spontaneously hate. A formal survey that gave people an option to rank names would likely bias people by putting ideas into their heads, Wattenberg said.

The survey also turned up a few interesting trends. The first is that people hate gender-bending names, particularly when a masculine name becomes feminine, as with Madison (which tied for second-most-hated for boys with 16 separate mentions) and Addison (which tied for sixth with eight mentions). They also hate names they can't spell, including Kaitlyn, which got eight mentions and tied for sixth. (People say "Caitlin" is fine because it's traditional, Wattenberg said, though the original Irish pronunciation of that spelling would be closer to "Kathleen.")

Similar-sounding names that explode in popularity all at once usually become victims of their own success, Wattenberg found. The most hated boys' names -- Jayden, Brayden, Aiden and Kayden -- all rhyme and all shot up from obscurity during the last decade. Among girls, a spate of "Mc"-names sparked annoyance: Mackenzie, McKenna and Makayla all made the top 10.

At the other end of the spectrum are people who hate ordinary names. This group is in the minority, but they pushed "Michael" into the top 10 most disliked names for boys.

"They really object to anything ordinary," Wattenberg said. "'Michael' or 'Matthew,' the boringness of those names infuriates them."

Twenge, who wasn't involved in Wattenberg's survey, said there are two schools of thought when it comes to baby naming. On the one side, there are parents who want their kids' names to stand out, she told LiveScience. On the other side are those who see names as a form of communication.

"Those are the people who are saying, 'I don't like the weird spellings and I don't like the really strange names,'" Twenge said. "The common names are good because they're easy for other people."

The individualistic viewpoint seems to be more common, said Michael Varnum, a doctoral candidate in social psychology at the University of Michigan. (Varnum said he "didn't take too much offense" to his name appearing on the most hated list.)

"Americans really prefer to not be particularly conventional or conformist in choosing names for their children," Varnum told LiveScience. That might help explain why names perceived as trendy, including Madison and Jayden, get so much hate: Jayden barely existed as a name until the 1990s, and it now stands at No. 11 in the most popular boys' name list.

No one really understands why certain names suddenly catch on in popularity -- or fall out of favor. According to Frank Nuessel, a University of Louisville professor and the editor of NAMES: A Journal of Onomastics, one survey done in the United Kingdom found that 40 percent of parents said their first concern in choosing a moniker for their child was how the name sounds. Another 38 percent said they looked to family tradition, while 10 percent said they used the name of a famous person.

In recent decades, people have moved toward "whatever feels fresh," Wattenberg said. That means moving away from common names, and common sounds, from the previous couple of generations. That may explain why many people hate the names Gertrude and Bertha. Hard, Germanic consonants were once thought to convey opulence. Now, Wattenberg said, "we live in an age of vowels," and poor, guttural Gertrude doesn't stand a chance.

One caveat, Wattenberg said: "We're starting to run out of vowels. We've gone through the As and the Es, and now you're seeing more Os and Is. … After that there's going to be nowhere to turn with the vowels, so I'm curious to see if we start to see Gertrude and her friends a decade or so down the line."

Wattenberg said the response to the most hated name list has been so strong that she's hoping to conduct a more systematic survey of a larger, more defined sample of people. She doesn't want to label names "good" or "bad," she said, but it could be useful for parents to know how others will react to their prospective name.

"Everybody is looking for this impossible dream, which is a name that everybody knows, everybody loves and nobody is using," Wattenberg said. "As you can imagine, it just doesn't work that way."