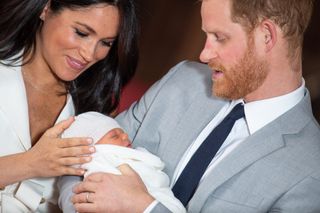 The wait is over, and the world now knows the name of the newest member of England's Royal Family: Archie Harrison Mountbatten-Windsor.

The name is a unique one for the new baby boy who is seventh in line for the throne. Unlike his cousins' names, the new baby's moniker isn't drawn directly from the family tree.

"By English standards, this is an incredibly normal name," said Laura Wattenberg, author of "The Baby Name Wizard: A Magical Method for Finding the Perfect Name for Your Baby" (Harmony, Revised Edition, 2013).

And that normalcy, Wattenberg said, is a statement in and of itself.

The royals announced the baby's name today (May 7) on Instagram. The question of what Markle and Prince Harry's child would be named has been of intense interest — it's even the subject of wagering, with bookies giving Spencer strong odds ahead of the announcement, according to The Telegraph. (Spencer was the maiden name of Princess Diana, Harry's late mother).

Names are typically the subject of interest because they're rich symbols, Wattenberg told Live Science.

"They pack so much information into a few letters, sending signals about age, sex, religion, class, ethnicity, culture, values, and of course, style," she said.

This is especially true because names have become increasingly tailor-made for parents and their hopes for their children over time. In the United States, for example, 40% of boys got one of the country's top-10 names in the 1880s. By 2007, the top 10 boy names covered less than 10% of new baby boys. In that sense, baby names convey information about their parents' values and attitudes. For example, a 2018 analysis of the Social Security database of U.S. baby names by Wattenberg found that newly emerging names show a wide gender gap. Boys are much more likely to be given names associated with power, speed, animals and courage (Diesel, Rage, Dash), while girls are more likely to get names linked to beauty, luxury or happiness (Cashmere, Gorgeous, Joy).

Baby names can even hint at parents' political ideology. A 2013 study of U.S. names found that parents in liberal areas prefer softer consonants, such as "L," for their babies' names, while parents in conservative regions favor harder sounds such as "B" and "D." Babies in Western states are also more likely to get unusual names compared to babies in New England, perhaps reflecting a more individualistic ethos in those "frontier" regions. (Markle, for the record, was born and raised in Los Angeles.)

The names of royal babies are at a whole different level. For Kate Middleton and Prince William, whose children are third, fourth and fifth in line for the throne, naming was a statement for the whole family, Wattenberg said.

"It was a moment of branding for the monarchy, a statement of purpose and identity," she said. "Their choice was tightly constrained."

And indeed, the pair drew their children's monikers from the family lineage. Their firstborn, George Alexander Louis, shares a first name with six British monarchs since 1714. Alexander was part of the name of his great-grandfather Prince Philip's grandfather, and Louis is in honor of his father's great-uncle Lord Louis Mountbatten.

Charlotte Elizabeth Diana, the pair's second child, drew her middle names from her great-grandmother, the current queen, and her grandmother, Princess Diana. Charlotte is both a feminine form of Charles (William's father and next in line for the throne) and an homage to Queen Charlotte, wife of George III, who ruled between 1738 and 1820, according to The Telegraph. The couple's third child, Louis Arthur Charles, also nods to Prince Charles and Lord Louis Mountbatten, as well as Arthur, part of Charles' and William's full name.

With a long line in front of him in the royal succession and parents known for a modern approach, the naming field seemed wide-open for "Baby Sussex," the nickname given to Harry and Meghan's child.

"This one is far less predictable than recent royal names," Wattenberg said before the announcement. That made the name more interesting, she said, because it was a chance to glimpse "something real and heartfelt" about Meghan and Harry.

"I take this name as a polite statement that royal trappings come second" for Harry and Meghan, Wattenberg said. William and Kate used a traditional approach to naming, Wattenberg said, picking names from a menu of classic family names. That's how almost everyone in the English-speaking world named their kids until a few decades ago,she said.

"It's really only in the last few generations that names have become trendy objects of style," she said.