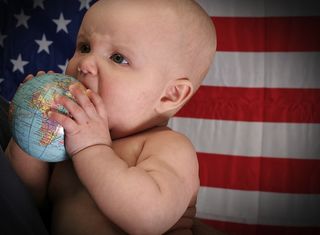 Quick, make a guess: Are Liam's parents Obama voters, or did they pull for John McCain? How about Kurt's mom and dad?

If your gut suggested that Kurt's parents might swing conservative while Liam's are liberal, congratulations. A new study of baby names does, indeed, show that parents in liberal neighborhoods are more likely to choose softer, more feminine sounds, such as "L," for their babies' names, while conservative parents go for macho-sounding K's, B's and D's.

The same research finds that liberal, well-educated parents are more likely to pick obscure names for their children, while conservative, well-educated parents take a more conventional naming path. Both methods seem to be a way of signaling status, said study researcher Eric Oliver, a political scientist at the University of Chicago — though it's unlikely parents realize what they're doing.

"I don't think people are really aware of why they're being drawn to certain names," Oliver told LiveScience. [Sophia's Secret: The 10 Most Popular Baby Names]

Lots of research has focused on American political polarization, particularly whether liberals and conservatives in the general public are moving further apart. Some possible examples of the gulf focus on consumer choices, including stereotypes like Whole Foods-loving liberals and Walmart-shopping conservatives.

But consumer choices are tough to link directly to ideology, because marketing and geography also play roles. Oliver and his colleagues wanted another way to look into ideology and lifestyle choices.

"Baby names kind of popped out as a possibility, largely because they're good barometers of taste, and they're remarkably free from market effects, because nobody is out selling baby names," Oliver said.

The researchers used birth records from the 545,018 babies born in California in 2004, representing 52,589 different names. (This number includes unique spellings, such that "Madison" and "Madyson" would be counted separately.)

Using U.S. Census data and 2004 California precinct voting returns, the researchers were able to match the birth records to neighborhoods. Americans tend to sort themselves into neighborhoods that more or less match their ideology, so neighborhood-voting patterns were used as a proxy for the parents' political leanings.

Given that proxy measure, Oliver expected he would not see any differences between liberal and conservative parents, he said. He was wrong.

"The fact that we would find any kind of systematic differences, much less the magnitude of differences that we found — I really did not anticipate that," he said.

The results revealed that overall, the less educated the parent, the more likely they were to give their child either an uncommon name (meaning fewer than 20 children got the same name that year in California), or a unique name (meaning only one child got that name in 2004 in California). When parents had less than a college education, there were no major ideological differences in naming choice.

"Educated liberal mothers are not making names up," Oliver said. "They're choosing more culturally obscure names, like Archimedes or Finnegan — or, in our case, we named our daughter Esme."

The sound of ideology

The sounds of liberal and conservative names varied, too. For both boys and girls, liberals tended to pick more feminine-sounding choices, such as Liam, Ely and Leila — names that include lots of L sounds and soft-A endings, including popular choices Ella and Sophia.

Conservatives, on the other hand, tend to pick names with more masculine-sounding K’s, B’s, D’s and T’s, such as Kurt. A couple of famous national political families demonstrate that pattern, Oliver said: The liberal Obamas named their daughters Sasha and Malia, both names heavy on A’s and L’s, whereas the conservative Palin family picked more masculine-sounding names for both their boys and girls, particularly Track, Trig, Bristol and Piper (although third daughter Willow got a softer-sounding moniker).

The findings of an ideological split mostly among the well-educated are no surprise, Oliver said, as only about 20 percent of the American public holds strong political principles, and those people tend to be college educated. In that group, he said, the data suggest that liberals are looking to distinguish themselves for their culture and education by choosing esoteric names. Conservatives, on the other hand, seem to pick traditional names that will distinguish their kids as economically successful.

"I think most of this happens unconsciously," Oliver said, recalling how he and his wife chose their daughter's name for its sound, not deliberately to signal any political leanings.

"We liked this name, and we wanted to choose a special name for her," Oliver said. "But underneath that, there is a lot of signaling going on."

The findings, which are not yet published in a peer-reviewed journal, were presented in April at the 2013 Midwestern Political Science Association Annual Meeting in Chicago.