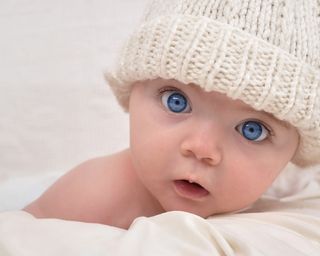 You named me what?
(Image: © Angela Waye, Shutterstock)

Thinking of naming your baby Jacob, Ava or Liam, but dashed to learn that all three are top-10 monikers? Take a deep breath: Even today's Jacobs (the No. 1 name for boys) aren't doomed to a life of going by their first name and last initial.

That's because parents are increasingly moving away from popular names, aiming for choices that will make their kids stand out, said Laura Wattenberg, author of "The Baby Name Wizard: A Magical Method for Finding the Perfect Name for Your Baby" (Three Rivers Press, 2013).

Among all this creative naming, however, trends do emerge: Parents love vowel-filled melodious names for girls, as revealed by the 2012 most popular baby names list, released May 9 by the Social Security Administration (SSA). And bold, aspirational names, such as Major and even Messiah, are on the rise for boys.

The SSA analysis found that Major was the fastest-rising baby name in the top 500 for boys (it now stands at No. 483), perhaps a nod to U.S. patriotism and love for military. The administration listed Arya as the top-rising name for girls, but officials missed the real story, Wattenberg said. The SSA algorithm doesn't include names that weren't in the top 1,000 a year before, she said, so it missed the real fastest-riser: Cataleya.

"It's a great illustration of how celebrities definitely have a huge influence on names, but it's really about style," Wattenberg said. "It's about parents hungry for any fresh new idea that fits their existing name fashion sense."

For girls, that sense includes a love for melody and vowels — see perennial top-10 favorites Olivia, Isabella and Sophia.

Other rising names for girls include short-but-soft Mila, Aria and similar styles, Wattenberg said. Rising boy names, such as Liam, Eli and Leo, have the same gentle vowels and lack hard consonants.

Though parents have traditionally been more conservative about boy names, the old standards for males are crumbling.

"Increasingly, boys' names are subject to a lot of the same style pressures that girls' names are," Wattenberg said. For example, about a third of the boys born in the United States get a name ending in the letter N.

Names such as King and Major haven't had much in the way of popularity since the 19th century, Wattenberg said — and no one back then dared name their child Messiah, No. 387 on the list today.

Jacob still reigns in the No. 1 spot for boys, as it has since 1999, but even as it remains the most popular, fewer boys get the name than they used to. Popular names, it turns out, are simply less popular than they were in the past.

The increasing diversity of names today means that even also-rans from the past, such as Dennis or Brenda, were given to more babies than even the most popular names of today, she said.

Even as many parents try for something different, though, tastes mysteriously run in tandem. Not too many parents are rushing out to name their sons Egbert or their daughters Gladys. Those names just don't fit today's styles.

"It's just this funny experience to realize that our tastes are so communal, especially in a domain like names, where you can't point to where it's coming from," Wattenberg said. "There's no advertising, there are no real tastemakers, but we all hear the same things as attractive. Even if we don't like the exact name, we're using the same sounds."