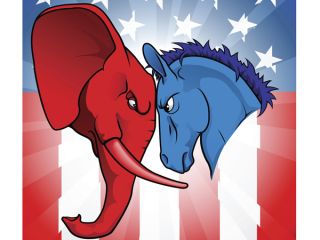 Whether you pulled the lever for Barack Obama or Mitt Romney may reflect how your brain copes with risk, new research finds.

The study, which examined the brain activity of 35 men and 47 women registered as either Democrat or Republican, found no difference in the amount of risk people of each political persuasion were willing to take on during a gambling game. But the way the brain processed risk worked differently between the groups, with Republicans showing more activity in an area linked with reward, fear and risky decisions and Democrats showing more activity in a spot related to processing emotion and internal body cues.

The findings hint at basic differences between people with different values, said study researcher Darren Schreiber of the University of Exeter.

"The ability to accurately predict party politics using only brain activity while gambling suggests that investigating basic neural differences between voters may provide us with more powerful insights than the traditional tools of political science," Schreiber said in a statement. [The 10 Greatest Mysteries of the Mind]

The politics of risk

Recent investigations into the psychology of liberals and conservatives have found a number of subtle differences, from conservatives exhibiting more squeamishness to liberals paying less attention to negative stimuli or threats.

A 2011 study published in the journal Current Biology found differences in some brain structures between politically liberal and political conservative young adults. Many of these areas were linked to risk-assessment and decision-making, prompting Schreiber and his colleagues to wonder if they could find differences in how these areas function during risky tasks.

The researchers had previously conducted a study in which people underwent brain scans while playing a gambling game. In each round, the participants saw three numbers, 20, 40 and 80, flash on a screen. If they hit a button while 20 was up, they were guaranteed 20 cents. If they waited for the 40 or 80, they might get a payout of either 40 or 80 cents — but they might also lose that amount of money. Thus, they were choosing between a safe bet and two higher-paying but riskier options.

Using voting records, the researchers found out political party affiliation for 35 of the men and 47 of the women in that study. Political parties aren't a perfect match with ideology, but they come very close, the researchers wrote Feb. 13 in the journal PLOS ONE. Most Democrats hold liberal values, while most Republicans hold conservative values.

Meanwhile, Democrats showed more activity in the left posterior insula, a portion of the brain responsible for processing emotions, particularly visceral emotional cues from the body. The particular region of the insula that showed the heightened activity has also been linked with "theory of mind," or the ability to understand what others might be thinking.

While their brain activity differed, the two groups' behaviors were identical, the study found.

Schreiber and his colleagues can't say whether the functional brain differences nudge people toward a particular ideology or not. The brain changes based on how it is used, so it is possible that acting in a partisan way prompts the differences.