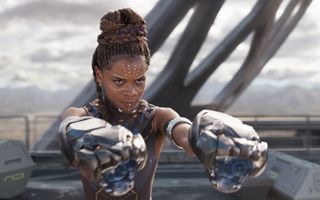 In the blockbuster film "Black Panther," the kingdom of Wakanda is a wonderland of fantastic, futuristic technology. There are self-piloting aircraft; cars and planes that can be remotely operated through virtual reality (VR) interfaces; high-definition holographic displays; and magnetic levitation train systems.

There is also the newly updated Black Panther suit worn by King T'Challa (Chadwick Boseman), which enhances his strength, speed and invulnerability, and is capable of absorbing and releasing massive quantities of kinetic energy.

In reality, much of what is seen on-screen in "Black Panther" is grounded in technologies in use today. At the Future Con panel session "The Science of Black Panther," presented March 30, a group of experts shared their thoughts on the groundbreaking movie — particularly the vibranium-powered technology that is Wakanda's greatest resource. [Science Fact or Fiction? The Plausibility of 10 Sci-Fi Concepts]

In the world of "Black Panther," Wakanda is arguably a global leader in technical achievement — albeit in secret — thanks to the fictional element vibranium. The idea that a rare element could only be found in an African country is not unusual, as other elements such as chromium and titanium are abundant in Africa, Lynnette Drake, a senior project leader in remediation environmental engineering for Lockheed Martin, told the panel audience.

And in many African countries today, innovative use and repurposing of technology and materials is "seemingly light-years ahead of most of the West," Gus Casely-Hayford, director of the Smithsonian National Museum of African Art, said during the panel discussion. Nigeria, Ghana, the Republic of Congo and Cote d'Ivoire are among the world's top destinations for recycling discarded e-waste, such as smartphones and computers, Africa Times reported last year.

In Wakanda, one of the standout tech achievements is magnetic levitation, or maglev, which can already be seen in high-speed trains currently running in Japan, China and South Korea; suspending the trains magnetically reduces friction, enabling them to travel at incredible speeds, Charles Johnson-Bey, a director of engineering and technology at Lockheed Martin, told the panel audience.

Meanwhile, the biosensors in T'Challa's suit mimic wearable, flexible nanomaterials that monitor bodily functions, such as heart rate, and send information wirelessly to computers or smartphones. And the suit providing enhanced strength and agility is akin to exoskeletons that increase the wearers' power and stability, Johnson-Bey added.

Shrinking T'Challa's suit to fit entirely inside his necklace might be a little beyond the capabilities of science right now — but just because no one's yet figured out how to do it doesn't mean it's impossible, Johnson-Bey told the audience.

"Things that we don't see today — we can make them happen," he said. "Asking these questions — that's how the world changes."

The credit for developing Wakanda's most innovative tech — including T'Challa's suit —goes to Shuri (Letitia Wright), genius inventor and T'Challa's younger sister. Her accomplishments in the film send a strong message to young girls — particularly young black girls, who rarely see themselves represented on-screen as scientists or engineers — that there is a place for them in the world of engineering and tech, Drake told the audience.

"Being an engineer, I could relate to Shuri," Drake said. "It brought me so much pride to see that."

Shuri shines in the film, not only as a well-rounded and thoughtful character but also as a talented inventor who plays a pivotal role in shaping the technological landscape of Wakanda. In fact, when an audience member asked the panelists to name the Wakandan tech that would be the most devastating if used as a weapon, David Betancourt, a staff writer and comics editor for The Washington Post, answered without hesitation.