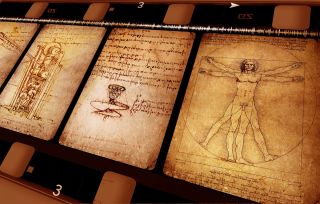 Leonardo da Vinci was both an inventor and artist during the Renaissance.
(Image: © Janaka Dharmasena/Shutterstock)

A pair of Italian scientists said they've discovered a hunk of hair that may have belonged to Leonardo da Vinci, and they want to use DNA testing to confirm whether it came from the famous Renaissance inventor and artist.

But other experts in all things Leonardo and DNA are skeptical. Leonardo's tomb was destroyed during the French Revolution, so there are no known bones to compare the hair against, nor are there living descendants whose genes are suitable for the task.

"The silly season for Leonardo never closes," said Martin Kemp, an emeritus professor of the history of art at the University of Oxford and an expert on Leonardo's life. [5 Things You Probably Didn't Know About Leonardo da Vinci]

A lock of hair

Leonardo died on May 2, 1519. Both his home country, Italy, and France, where he died, are hosting events to celebrate the artist and inventor on the 500th anniversary of his death. According to The Guardian, a new lock of hair purported to be from Leonardo will go on display May 2 at the Ideale Leonardo da Vinci museum in Vinci, Italy, the town where he was born, in 1452.

The hair was found in a private collection in the United States, according to Alessandro Vezzosi, the museum's director, and Agnese Sabato, the president of the Leonardo da Vinci Heritage Foundation, who announced plans to DNA test the hair this week. It is tagged, "les cheveux de Leonardo da Vinci." ("Les cheveux" is French for "the hair.")

But there is likely no reliable way to link the hair genetically to Leonardo, said Kevin Schürer, a historian and genealogist at the University of Leicester in England. Schürer worked on the project of reconstructing Richard III's family line and finding living descendants of the English monarch to compare genetically with the king's bones, which were found beneath a parking lot in 2013.

Firstly, Schürer told Live Science, extracting DNA from a sample of hair isn't necessarily straightforward. Depending on how the hair has been stored and handled, all of the original DNA may be degraded or contaminated beyond recognition. [Gallery: In Search of the Grave of Richard III]

Even if a usable sample is found, the researchers have nothing to compare it to for confirmation. Leonardo's tomb was ransacked during the French Revolution, Kemp said, so there are no bones clearly associated with the name.

And family ties likely won't do the job either, Schürer said. There are only two types of DNA that can be traced reliably over long periods, he said: mitochondrial DNA, which comes from the mother and is passed on only through an unbroken female line, and Y-chromosome DNA, which comes from the father and can pass only through an unbroken male line.

Leonardo was an illegitimate child, probably the son of a notary in Tuscany named Messer Piero Fruosino di Antonio da Vinci. The identity of Leonardo's mother is unknown, though some records suggest that her name was Caterina. Some historians believe she was a slave, while others think she was a local free woman. Based on tax documents and property records, Kemp has suggested that she was an orphan known to have lived with her grandmother near the town of Vinci. [Leonardo Da Vinci's 10 Best Ideas]

This sketchy genealogy puts scientists in a bad spot for tracing Leonardo's DNA. In 2016, Vezzosi and Sabato claimed to have identified 35 living relatives of Leonardo — including the film director Franco Zeffirelli — using historical documents. All of the relatives were linked to Leonardo's father via the artist's brother, since Leonardo did not marry or have children. And those relatives do not represent unbroken male or female lines.

For example, Schürer said, one of the men identified said his grandmother was proud of her Leonardo heritage. "He has no shared DNA with da Vinci at all," Schürer said. His grandmother obviously could not have passed along any Y-chromosome DNA to him, because she had no Y chromosome. And because the genealogical links were solely along Leonardo's paternal heritage, researchers would have had to rely on the Y chromosome.

Because families multiply and spread, Leonardo no doubt has millions of living relatives, Schürer said. But the vast majority are of no use to researchers, from a DNA perspective. To get a good identification on Leonardo's hair or bones, you'd need to have multiple people with unbroken male or female genealogies stretching back 600 years.

Just one person won't do, Schürer said. Historical documents aren't enough to prove someone was biologically related to their purported parent. Richard III provides a good example. To clinch the identification of the king's bones, Schürer and his team traced the lineage through Henry Somerset, the fifth duke of Beaufort, who lived between 1744 and 1803 and was connected to Edward III through 15 generations of male offspring. Edward III was Richard III's great-great-grandfather, also through an all-male line, so the researchers were able to use Y-chromosome DNA.

Of the five living male-line descendants the team tested, four were indeed linked to Richard III through DNA. One was not. At some point in the lineage, someone's dad was not really his dad. This shows the importance of multiple lineages for testing, Schürer said.

"Had we only taken that one sample, everything would have been wrong," he said.

In the case of Leonardo, the researchers simply don't have a clear lineage, Schürer said, noting that Vezzosi and Sabato haven't published their work on the genealogies. (Vezzosi and Sabato did not respond to a request for comment sent through the Leonardo museum.)

"Unless you have certainty somewhere," Schürer said, "you're always measuring uncertainty against uncertainty."

It's also unclear what a snippet of DNA from Leonardo would offer to historians, Kemp said. At most, real Leonardo DNA could kill the story that the artist's mother was a slave from North Africa or the Near East, Kemp said.

"But it's more about sensation than history," he said, "and tells us nothing about Leonardo's actual accomplishments."