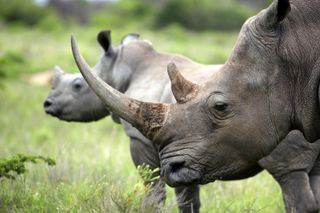 This mama rhino, shown here with her calf, has a long and pointy horn.
(Image: © Shutterstock)

The rhino's horn makes it the unicorn of Africa and Asia, while the elephant's tusks look like they make up a giant, stout mustache. Although these features — horns and tusks — give the rhino and elephant their iconic looks, they're also, in large part, the reason these animals are endangered.

In short, poachers and hunters target rhinos for their horns, which many people (incorrectly) believe have healing powers. Similarly, many elephants are killed for their ivory, which is often carved into artwork and viewed as a status symbol and monetary investment, particularly in Asia.

But do these priceless body parts grow back, or are these animals fated to die as long as humans lust after their horns and tusks? [Why Can't Elephants Jump?]

The answer? Elephant tusks do not grow back, but rhino horns do.

An elephant's tusks are actually its teeth — its incisors, to be exact. Most of the tusk consists of dentin, a hard and dense bony tissue, and the entire tusk is coated with enamel, the hardest known animal tissue, according to the World Wildlife Fund. It's no wonder elephants are known for their tusks; nearly all African elephants have these features, and most male Asian elephants sport the long teeth. A few elephants with extra-long tusks, known as big tuskers, are especially beautiful.

Tusks are quite handy for the animals. Elephants can use them to protect their trunks, dig for water, lift objects, strip bark from trees, gather food and defend themselves, according to "Poached: Inside the Dark World of Wildlife Trafficking" (Da Capo Press, 2018), by science journalist Rachel Nuwer.

But once removed, these tusks don't grow back. "There is no feasible way to harvest tusks: They are embedded in the animals' skulls and have a nerve running down their center," Nuwer wrote in the book. "This means ivory would have to come from culled elephants and ones that die naturally."

But culling isn't a good option, either. With culling, people would take the greatest amount of ivory (that is, kill older or weaker elephants) from a herd without diminishing its population growth. But elephants reproduce and grow so slowly that it would be impossible to meet market demand, according to a 2016 study published in the journal Current Biology.

Not everyone, however, knows that tusks don't grow back. For instance, the International Fund for Animal Welfare (IFAW), a conservation charity, surveyed 1,200 people living in six Chinese cities in 2007. The group found that 70 percent of respondents thought that ivory falls harmlessly out of elephants' mouths, just like a child losing a tooth, Nuwer reported.

It's possible that the Chinese word for tusk, which translates into "elephant tooth," creates this confusion, Grace Ge Gabriel, IFAW's Asia regional director, told Nuwer. If that's the case, it appears that education is key: After IFAW volunteers told survey participants that removing an elephant's tusks kills the animal, more than 80 percent of respondents said they wouldn't buy ivory.

Shortly after the survey, in 2008, the IFAW launched a poster campaign that continues to reach 23 million people in China every day, Nuwer reported. On the poster, a baby elephant happily tells his mom that it has teeth and asks, "Aren't you happy?" When she doesn't respond, the baby asks the question again, but she still doesn't reply. "Babies having teeth should bring joy to a mother," the poster states. "But what does it mean for elephant families? Because of people's unnecessary want of ivory, hundreds and thousands of elephants are killed for the ivory trade." [Photos: Seized Elephant Ivory Reveals How Massive Cartels Operate]

Unlike an elephant's tusks, rhino horns do grow back. These horns are made of keratin, the same substance that makes up fingernails and hair. Still, poachers often kill rhinos for their horns, even though cutting the horn off would preserve the animal's life and allow the beast to grow a fresh horn. There are even extreme cases of poachers slicing open pregnant rhinos "to extract their unborn fetuses and hack off their tiny horn stumps," Nuwer wrote in "Poached."

In order to save rhinos from poachers, wildlife managers sometimes have professionals dehorn rhinos, a process that involves sedating the beast and sawing off its unicorn-like prize. "Over the course of a 35- to 40-year life, a rhino on an 18-month trimming schedule will produce about 130 pounds [59 kilograms] of horn," Nuwer wrote in her book.

Granted, dehorning doesn't always work, as sometimes poachers still go after the leftover horn stump. And, once hornless, rhinos can't use it for everyday activities, such as defending their territories, guiding calves and digging for water. But it's still a useful deterrent that could save rhino lives. After a rhino at Thoiry Zoo in France was illegally killed for its horn, a Czech zoo decided to beat poachers to the punch in 2017, dehorning its own rhino herd. The whole process, which took about an hour for the first rhino patient, was painless to the animal, said Jiří Hrubý, the zoo's rhino curator.