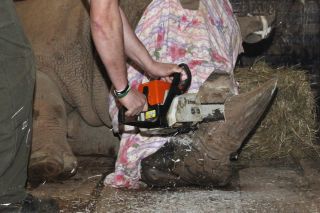 A veterinarian at the Dvůr Králové Zoo in the Czech Republic uses a chainsaw to dehorn a male southern white rhinoceros (Ceratotherium simum simum) named Pamir on Monday, March 20, 2017. The decision to dehorn the zoo's rhinos came after a rhinoceros was poached inside its enclosure at a zoo in France.
(Image: © Simona Jirickova)

In the wake of a brazen incident of rhino poaching at a French zoo, a Czech zoo that holds the largest number of rhinoceroses of any zoo in Europe is cutting the horns off the at-risk animals.

Přemysl Rabas, director of Dvůr Králové Zoo, announced today (March 21) that the zoo had begun dehorning its herd of 21 rhinos. The first rhino underwent the procedure under sedation yesterday.

"The intervention took less than 1 hour, and it was performed without any complications," Jiří Hrubý, the zoo's rhino curator, said in a statement. [A Crash of Rhinos: See All 5 Species]

Rhino horns are made of keratin, the same material that makes up human fingernails and hair. Removing rhinos' horns doesn't hurt the animals, and the horns do grow back.

The zoo in the town of Dvůr Králové nad Labem was, until recently, home to one of the last northern white rhinoceroses (Ceratotherium simum cottoni) on Earth; the elderly female died in 2015. Today, the only three northern white rhinos alive still belong to Dvůr Králové Zoo, but they live on a preserve in Kenya, protected by an armed guard. Increased poaching has driven the subspecies to the brink of extinction.

Rhinoceros horn is prized in traditional Chinese medicine, even though the horns have no medicinal value, and the black market demand for horn has soared in recent years in China and Vietnam. Over the past decade, rhino poaching in Africa has taken off, according to a report to the United Nations' secretariat for the Convention on International Trade in Endangered Species of Wild Fauna and Flora (CITES). There were 60 confirmed incidents of poaching on the continent in 2006, a number that climbed steadily to 1,342 by 2015.

On March 7, a 4-year-old white rhinoceros at the Thoiry Zoo in France was found dead in its enclosure, its largest horn sawed off. The rhino, nicknamed "Vance," had been shot in the head. It was the first known incident of poaching within a European zoo, though there had been a violent attack on a rhino orphanage in South Africa in February.

Nevertheless, the Thoiry Zoo killing was not an isolated incident, Dvůr Králové Zoo officials said. Criminal organizations have been targeting rhinoceros horns in museum and historical collections, including the zoo's own collection of horns, which was stolen while on loan for an exhibit at Napajedla Castle in Napajedla in the Czech Republic. The thieves were caught, according to zoo officials, but the horns were never found.

The Czech zoo has electronic security measures to protects its rhinos, but it took the additional step of removing horns as a way to ensure the animals' safety in the face of what the zoo called an "increasing threat."

"Pamir," a male southern white rhinoceros (Ceratotherium simum simum), was the first at the zoo to have his horn removed. Veterinarians anesthetized the rhino and removed his horn with a chain saw. The removed horns from all the rhinos will be stored safely somewhere outside the zoo, officials said.

The zoo is home to four southern white rhinos and 17 black rhinos (Diceros bicornis), a critically endangered species only around 5,000 individuals left in total. The zoo will remove the horns of all the rhinoceroses that have them; a few, like a male named Natal, rub and file theirs down to nubs naturally.

The Dvůr Králové Zoo is not the only European zoo to consider dehorning in the wake of the Thoiry poaching incident. The Pairi Daiza zoo in Belgium announced earlier this month that it would shorten its rhinos' horns to reduce the animals' risk of being targeted, AFP reported.