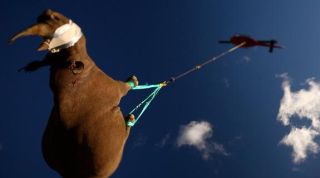 Suspended from a helicopter, a critically endangered black rhino (sedated) takes a 10-minute flight to a vehicle destined for a new habitat safe from poachers.
(Image: © Green Renaissance/WWF)

Biologists and game park officials in South Africa say that rhinos are being slaughtered at the rate of one each day, and that most of these animals are killed to feed a demand for traditional Chinese medicines and cures.

According to the World Wildlife Fund, more than 340 rhinos have been killed so far this year in South Africa, and the problem is getting worse. Last week, the International Union for Conservation of Nature issued a report on endangered species, concluding that the western black rhino is now officially extinct. Two other species, the black and white rhinos, are also seriously endangered and could be gone from the wild within a few years.

The rhinos are being poached to extinction largely for their horns, which are sometimes sold as trophies or decorations, but more often are ground up and used in traditional Chinese medicine. Sometimes the powder is added to food, or brewed in a tea, as some people believe that African rhino horns are a powerful aphrodisiac and panacea. These animals are not being killed for meat or to control their population, but because of misinformation and superstition.

It's not just rhinos that face this threat. Throughout Asia, the penises, claws and bones of various animals including tigers, rhinos, and bears are sold in folk medicine shops to cure everything from arthritis to asthma, impotence to cancer . Some people believe that tiger bones and claws can cure a variety of maladies, including back pain, arthritis and fatigue.

In July, officials along the border between Russia and China intercepted a truck carrying more than 1,000 bear claws and 26 elk lips weighing 143 pounds in total that were destined for medicine shops across Asia. The bears and elk were most likely left to bleed to death after their paws and lips were sliced off by the poachers.

Shark populations have also declined dramatically in recent years, due in part to the demand for shark fins, eaten as a delicacy and used in Chinese medicine. The live, but finless, sharks are often thrown back into the ocean to die.

There is no scientific evidence that any of these animal body parts treat or cure any disease or medical problem, but old beliefs die hard. The threat to Earth's biodiversity doesn't just come from pollution and human demand for food, and the extinction of the rhino reveals a dark side to belief in alternative medicines.