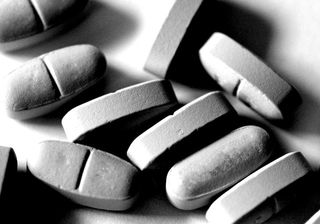 On April 12, 1955, the first successful polio vaccine was administered to almost 2 million schoolchildren around the country. Its discoverer, University of Pittsburgh medical researcher Jonas Salk, was interviewed on CBS Radio that evening.

"Who owns the patent on this vaccine?" radio host Edward R. Murrow asked him.

It was a reasonable question, considering that immunity to a deadly disease that afflicted 300,000 Americans annually ought to be worth something.

"Well, the people, I would say," Salk famously replied. "There is no patent. Could you patent the sun?"

In a world where the cancer drug Avastin — patented by the pharmaceutical company Genentech/Roche — costs patients about $80,000 per year without having been proven to extend lives, Salk's selflessness has made him the hero of many medical researchers today.

One of Salk's admirers is Evangelos Michelakis, a cancer researcher at the University of Alberta who, three years ago, discovered that a common, nontoxic chemical known as DCA, short for dichloroacetate, seems to inhibit the growth of cancerous tumors in mice. Michelakis' initial findings garnered much fanfare at the time and have recirculated on the Web again this week, in large part because of a blog post ("Scientists cure cancer, but no one takes notice") that ignited fresh debate with people wondering if it was true.

The mechanism by which DCA works in mice is remarkably simple: It killed most types of cancer cells by disrupting the way they metabolize sugar, causing them to self-destruct without adversely affecting normal tissues.

Following the animal trials, Michelakis and his colleagues did tests of DCA on human cancer cells in a Petri dish, then conducted human clinical trials using $1.5 million in privately raised funds. His encouraging results — DCA treatment appeared to extend the lives of four of the five study participants — were published last year in Science Translational Medicine.

The preliminary work in rodents, cell cultures, and small trials on humans points to DCA as being a powerful cancer treatment. That doesn't mean it's the long-awaited cure — many other compounds have seemed similarly promising in the early stages of research without later living up to that promise — but nonetheless, Michelakis believes larger human trials on DCA are warranted.

Like Jonas Salk, Michelakis hasn't patented his discovery. It's not because he doesn't want to, but because he can't. When it comes to patents, DCA really is like the sun: It's a cheap, widely used chemical that no one can own.

Pharmaceutical companies are not exactly ignoring DCA, and they definitely aren't suppressing DCA research — it's just that they're not helping it. Why? Drug development is ultimately a business, and investing in the drug simply isn't a good business move. "Big Pharma has no interest whatsoever in investing [in DCA research] because there will be no profit," Michelakis told Life's Little Mysteries,a sister site to LiveScience. [Countdown: Top 10 Worst Hereditary Conditions]

The long road to a cure

Pharmacologist Omudhome Ogbru, an R&D director at a New Jersey-based pharmaceutical business, The Medicines Company, notes, "Drug companies are like other companies in that they manufacture products that must be sold for a profit in order for the company to survive and grow."

Only one in 10,000 compounds studied by researchers ends up as an approved drug, Ogbru explained in an op-ed at MedicineNet. To get to the approval phase, drugs must undergo seven to 10 years of testing at a total cost averaging $500 million — all of which can be for naught if the drug doesn't receive Food and Drug Administration approval. Even if it does, "only three out of every 20 approved drugs bring in sufficient revenue to cover their developmental costs."

"Profit is the incentive for the risk that the company takes," Ogbru wrote. "Without the promise of a reasonable profit, there is very little incentive for any company to develop new drugs."

It would be nearly impossible to make a profit on a drug like dichloroacetate. "If DCA proves to be effective, then it will be a ridiculously cheap drug," Michelakis said.

Daniel Chang, an oncologist at the Stanford Cancer Center who recently began looking into DCA, concurred. "I'm sure the lack of patentability is playing a role in the lack of investigation," Chang told us in an email.

While government health organizations like the National Cancer Institute give research grants to help fund clinical trials, "those would never be enough to get DCA approved as a cancer treatment," said Akban Kahn, a Toronto doctor. "You need hundreds of millions of dollars, and a government grant is not that big."

DCA research has moved along much more slowly than if a drug company were footing the bill. That said, grassroots funding has allowed surprisingly steady progress. "Through the website, radio, phone calls, things like that, we raised about $1.5 million in nine months" at the University of Alberta DCA Research Center, Michelakis said. This was enough to fund a detailed study of DCA treatment in five brain cancer patients.

The results were promising. The study, however, was small and lacked a placebo control, making it impossible to say for sure whether the patients' conditions improved because of the DCA treatment or because of something else. Daniel Chang, the Stanford researcher, described the study's results as interesting but inconclusive. In their paper, Michelakis and his co-authors wrote, "With the small number of treated participants in our study, no firm conclusions regarding DCA as a therapy … can be made."

Despite the dearth of clinical tests, one family practitioner, Akbar Khan of Medicor Cancer Centre in Toronto, prescribes off-label DCA to his cancer patients. (He says this can be done in Canada because DCA is already approved there for treating certain metabolism disorders. Michelakis, however, said he does not think Khan should be prescribing the drug before it is officially approved for cancer use.)

"We are seeing about 60 to 70 percent of patients who have failed standard treatments respond favorably to DCA," Khan told Life's Little Mysteries. Khan's group just published its first peer-reviewed paper in the Journal of Palliative Medicine. "It's a case report of a patient with a rare form of cancer who had tried other treatments that weren't working, so he came to us for DCA. It was effective, and actually it's quite a dramatic result. He had multiple tumors, including a particularly troubling one in his leg. DCA stabilized the tumor and significant reduced his pain.

"We currently have three patients with incurable cancers who are in complete remission, and are likely cured, from using DCA in combination with conventional palliative (non-curative) treatments. We are in the process of publishing these cases," he said. [Countdown: Top 10 Mysterious Diseases]

Small trials and case studies won't be enough, however, to prove DCA works. Further investigation into the drug's efficacy is necessary, and without the help of Big Pharma, it will have to happen in an unusual way.

"This could be a social experiment where the public funds these trials," Michelakis said. "After discovering the effect of DCA on cancer cells, I consider this the second-biggest achievement of our work: when we showed that you can bring a drug to human trials without a lot of money. If others were inspired" — his group is beginning to establish collaborations with some prominent cancer hospitals —"this could be a major achievement. Eventually the federal bodies like the National Cancer Institute would see there is enough evidence, and then they'll help with funding."

"It represents a new attitude and a new way of thinking," he added.

Perhaps not entirely new. For inspiration and encouragement, Michelakis often recalls the story of the polio vaccine: "It succeeded in eradicating a deadly disease without making a profit."

Editor's Note: This story and headline were updated May 18 to remove any impression that Big Pharma is to blame for the lack of research into DCA. In fact, as the story stated, the lack of financial incentive (the inability to patent DCA) is what discourages drug companies from studying the chemicals.