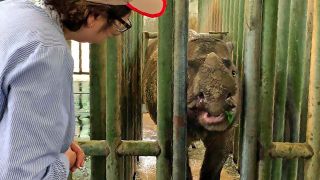 The last of her species in Malaysia, Iman died six months after the death of the country's last male Sumatran rhino.
(Image: © AP/Shutterstock)

The last Sumatran rhino in Malaysia, a female dubbed "Iman," died on Saturday (Nov. 23) at the Borneo Rhino Sanctuary in Sabah, Malaysia. Her death at age 25 marks the extinction of her species in that country and is a grim reminder of the animals' vulnerability; fewer than 80 wild Sumatran rhinos (Dicerorhinus sumatrensis) remain in the wild, according to the International Union for Conservation of Nature (IUCN).

Captured in 2014 and brought to the sanctuary for a breeding program, Iman suffered from uterine fibroid tumors — growths on the walls of her uterus — that sent her health into a serious decline over the past few years, Malaysian news site Malaysiakini reported.

Recently, Iman's tumors were putting increasing pressure on her bladder and causing her significant pain, officials told Malaysiakini. The rhinoceros reportedly died from shock, said State Tourism, Culture and Environment Minister Datuk Christina Liew, according to Malaysian English-language news site The Star. When an organism's body goes into shock, its organs aren't getting enough blood flow and they eventually cease to function.

Sumatran rhinos are the smallest species in the rhino family. They stand about 3 feet (1 meter) tall, measure up to 13 feet (4 m) long and can weigh as much as 2,000 lbs. (900 kilograms), according to the World Wildlife Fund.

Though Iman's tumors weren't malignant, they were getting bigger and spreading to her bladder, and the risk of blood loss from surgery was too great for veterinarians to perform a life-saving operation, Sabah News Today (SNT) reported in the days before she died. At the time of her death, Iman weighed 1,049 lbs. (476 kg); she had lost 97 lbs. (44 kg) over the last few months due to her illness, according to SNT.

Six months ago, Malaysia lost its last male Sumatran rhino, named Kretam, who died of organ failure on May 27 when he was around 30 years old. The last known wild populations of Sumatran rhinos consist of two subspecies — the western Sumatran and the eastern Sumatran — found in forests on the islands of Sumatra and Borneo, in Indonesia.

"The passing of Iman, Malaysia's last known Sumatran rhino, marks a tragic development for this species," Jon Paul Rodriguez, chair of the IUCN's Species Survival Commission, said in a statement on behalf of Sumatran Rhino Rescue.

"With fewer than 80 Sumatran rhinos left on the planet, the species' last hope lies in Indonesia. Iman's death underscores the urgency of the global community's efforts to save the Sumatran rhino from extinction and we are committed to continuing our work to support the government of Indonesia's Emergency Action Plan to save this species," Rodriguez said.