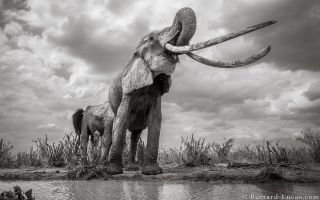 An elephant matriarch in Kenya that recently died of old age was an impressive sight to the very end, thanks to a pair of tusks that were so unusually long that they resembled those of a woolly mammoth.

The elephant, known as F_MU1, lived in Kenya's Tsavo region for more than 60 years, according to wildlife photographer Will Burrard-Lucas, who captured stunning images of the stately pachyderm in the weeks prior to her death.

F_MU1 was a "big tusker," an African elephant with tusks long enough to brush the ground, Burrard-Lucas recently wrote in a blog post. He visited Tsavo in August 2017 with the Kenyan nonprofit Tsavo Trust, to document the group's wildlife-conservation work. And it was there that Burrard-Lucas first glimpsed the stately elephant, whom he dubbed "Queen of the Elephants" in his post. [Elephant Images: The Biggest Beasts on Land]

The group caught up with F_MU1 and other elephants in a clearing, and Burrard-Lucas photographed her using a remote-controlled, robot-mounted camera called BeetleCam. He chose the BeetleCam because it travels close to the ground, so its low-slung perspective would showcase the astonishing length of the elephant's tusks, Burrard-Lucas wrote.

Over several days, Burrard-Lucas photographed F_MU1 near watering holes and acacia trees (where she fed), with the beast sometimes passing only inches away from the rolling camera. Though she was old and very skinny, she proved to be "an exceptional subject," Burrard-Lucas said.

"If I hadn't looked upon her with my own eyes, I might not have believed that such an elephant could exist in our world," he wrote.

F_MU1 died of natural causes, but big tuskers usually aren't so lucky, as their massive tusks make them targets for ivory poachers. In 2017, poachers killed and mutilated a big tusker named Satao II who was nearly 50 years old; one of the creature's tusks weighed 114 lbs. (51.5 kilograms) and the other weighed 111 lbs. (50.5 kg), The Guardian reported that year.

To date, only about 25 big tuskers remain in the wild, according to The Guardian.