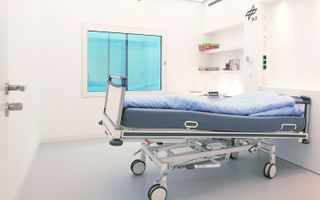 Beds in the study are angled so that participants' heads are lower than their bodies by 6 degrees.
(Image: © DLR)

That's what a group of space scientists are hoping: They're recruiting female subjects to do just that for an upcoming study on how to protect the human body from the effects of microgravity.

Also, there will be pancakes. [6 Weird Facts About Gravity]

These so-called bed-rest studies are conducted in a partnership by NASA, the German Space Agency (DLR) and the European Space Agency (ESA). The first part of the Artificial Gravity Bed Rest Study (AGBRESA) launched on March 25 at the DLR's Institute for Aerospace Medicine in Cologne, Germany, and the second stage — which still needs volunteers — will take place from September to December of this year, NASA representatives said in a statement.

But what does lying in bed have to do with weightlessness in space? When a person reclines with their head lower than their body, over time, that position causes fluids in the body to shift toward the head. The same condition — fluids migrating headward — is experienced by astronauts in the absence of gravity, DLR explained on the project website.

By observing people reclining for 60 days with their heads 6 degrees lower than their bodies, researchers can develop strategies to help astronauts confronting similar challenges in space. One method that the study subjects will test is a centrifuge that will spin them around for 30 minutes each day — though not as fast as a carnival ride — generating artificial gravity and forcing fluids to circulate around the body, according to the DLR.

Bed-rest studies last for a total of 89 days: 15 days to acclimate to the equipment, 60 days of bed rest and then 14 days of rest before returning to "everyday life," DLR representatives said. Participants recline in single rooms, and all daily activities take place lying down.

To make sure that the subjects don't gain weight during this two-month period of restricted activity, researchers provide them with a standardized diet; however, the meals are not "extra healthy," and participants will sometimes receive "pancakes and sweets," according to the DLR.