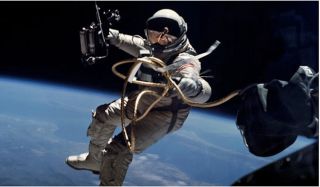 Humans first journeyed into space in 1961, but even half a century later, questions remain about how spaceflight affects the human body. In a new study, scientists got down to the molecular level to better understand why weightlessness causes changes in the body.

A number of effects have been documented in the handful of individuals who have experienced spaceflight, including changes to the body's metabolism, temperature control, muscle tone and immune system, according to the study — but the mechanisms driving these changes still aren't fully understood.

The answer, however, may reside in one of the body's building blocks: proteins. [7 Everyday Things That Happen Strangely In Space]

In the new study, published online Aug. 15 in the journal Scientific Reports, researchers from Canada and Russia found that spaceflight lowered the concentrations of certain proteins in the body, and some of these proteins appeared to return more slowly to their pre-spaceflight levels than others.

Looking at the differences in protein concentrations is one way to understand some of the larger changes that take place in the body during spaceflight. For example, the researchers found that nearly all the proteins that were affected by spaceflight were related to just a few processes in the body, including fat metabolism, blood clotting and immunity.

The scientists, for example, found that "in weightlessness, the immune system acts like it does when the body is infected because the human body doesn't know what to do and tries to turn on all possible defense systems," senior study author Evgeny Nikolaev, a professor of chemical physics at the Skolkovo Institute of Science and Technology in Russia, said in a statement.

To study the effects of spaceflight on proteins in the body, the scientists took three blood-plasma samples from each of 18 Russian cosmonauts before and after long-duration missions to the International Space Station. The first sample was taken 30 days before the mission, the second sample was taken immediately after the cosmonaut returned to Earth, and the final sample was taken seven days after that. In future studies, Nikolaev noted that cosmonauts could take blood samples while in orbit to provide more accurate accounts of how protein concentrations change.

The scientists used a mass spectrometer to analyze the concentrations of 125 different proteins in the cosmonauts' blood plasma. (Mass spectroscopy is a technique used to assess the different masses in a given sample.)

Just 19 of the 125 different proteins analyzed were found at different concentrations both immediately after and seven days after the cosmonauts' return to Earth, compared with pre-spaceflight levels, according to the study. Concentrations of several proteins, for example, were lower immediately after spaceflight, but returned to pre-spaceflight levels within seven days. It's possible that the changes in concentrations in these instances were due to the final stage of the flight, which includes the emotional stress of landing, the researchers wrote. [6 Surprising Facts About the First Manned Space Mission]

Another group of proteins were found to be at similar concentrations to pre-spaceflight levels immediately after landing, but then either increased or decreased in the following days. These changes may reflect how the body reacclimates to Earth's gravity after spaceflight, according to the study.

Two of the proteins, which are involved in transporting fat and iron through the blood, were at significantly lower levels both immediately after the cosmonauts' return from space, and seven days. These lingering changes suggest that the body had made certain adaptions to handle spaceflight, the researchers wrote.

"Weightlessness for humans is completely new in evolutionary terms, being an environmental factor [that] our species has not faced during the course of evolution," the researchers wrote in the study. Because of this, the ways that humans adapt to weightlessness are not predictable, they said.