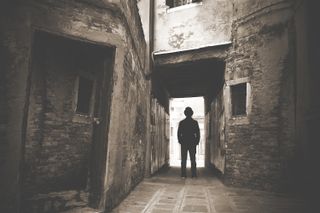 Did the analysis of a silk shawl just provide a major clue in one of London's coldest cases, the identity of Jack the Ripper?

No. It doesn't. Not at all. That's according to two experts, a geneticist and a Ripperologist (a Jack the Ripper historian), who spoke with Live Science about the new study.

In fact, this study has so many holes in it — including the provenance of the shawl, contamination of genetic material on the shawl, and the methods used to analyze this genetic material — that it's a wonder it was published at all, said Turi King, a reader in genetics and archaeology at the University of Leicester, who was not involved in the study. [10 Biggest Historical Mysteries That Will Probably Never Be Solved]

Jack the Ripper is notorious for killing and mutilating five women in London in just three months during 1888. According to the new study, a silk shawl was found by the body of Catherine Eddowes, a victim killed by Jack the Ripper during the early morning hours of Sept. 30, 1888.

Acting Sgt. Amos Simpson reportedly took this 8-foot-long (2.4 meters) shawl from the crime scene; the shawl was reportedly passed down through his family for generations until it was sold in 2007 to amateur sleuth Russell Edwards, who made it available to scientists for study.

Soon after, descendants of Eddowes and one of the top suspects, Aaron Kosminski, who at the time was a 23-year-old Polish barber, were located by study lead researcher Jari Louhelainen, a senior lecturer of molecular biology at Liverpool John Moores University in the United Kingdom. Then, with study co-researcher David Miller, a reproduction and sperm expert at the University of Leeds in the United Kingdom, Louhelainen looked at mitochondrial DNA (genetic material passed down by mothers) on the shawl.

The researchers found the genetic material on the shawl matched the descendants of Eddowes and Kosminski. The analysis also revealed, the researchers claim, that the killer was a man with brown hair and brown eyes, which matches an eyewitness account from that time.

"Although these characteristics are surely not unique, they fully support our hypothesis," the researchers wrote in the study, published online March 12 in the Journal of Forensic Sciences. It's unknown how common brown eyes and hair were in 1888, but today in England blue eyes are more common, the researchers noted.

These results were initially made public five years ago in Edwards' book "Naming Jack the Ripper" (Lyons Press, 2014), but this is the first published study on the analysis.

First and foremost, it's doubtful that the shawl belonged to Eddowes, Jack the Ripper's fourth victim.

London has two police forces. Most of the Jack the Ripper murders happened under the jurisdiction of the Metropolitan Police Service, a force that operates out of Scotland Yard. But Eddowes was killed in an area overseen by the City of London Police.

Acting Sgt. Simpson worked for Scotland Yard, so it's unclear why he would have been working on Eddowes' case, given that it was a City of London Police case, said Paul Begg, a U.K.-based author who has written six historical books about Jack the Ripper, and was not involved with the new study. What's more, Simpson's patrolling area wasn't anywhere near the spot where Eddowes was murdered, so it's strange he would have gone out of his way to travel to the scene of the crime and take the shawl, Begg said. [Crime Scene Photos: These Items Came from UK's Most Infamous Cases]

On top of that, "there's no evidence that a shawl was connected with Catherine Eddowes' murder anyway," Begg told Live Science. "Effectively, the provenance of the shawl is extremely bad."

He added that this particular eyewitness account of Jack the Ripper is dubious. Three men who had just left a social club saw a woman talking to a man in the same location where Eddowes was found dead shortly thereafter. But it's unknown if this man and women were in fact Jack the Ripper and Eddowes. Moreover, only one of those men got a good look at the mystery man, Begg said.

The researchers of the study did not respond to a request for comment.

The genetic analysis of the shawl is also unconvincing, said King, who is known for her work sequencing the whole genome of King Richard III.

The shawl has been handled by countless people over the years, meaning that their DNA got on the shawl, contaminating it, King said.

It's her understanding that the descendants of Eddowes and Kosminski, who took part in the new study, were in the presence of the shawl. "So, all you need to do is breathe anywhere near the shawl and they could end up putting their DNA on it," King said.

In the study itself, the researchers are vague on how they did the analysis. It's key that scientists describe their methods clearly, as it allows other scientists to assess them and even try to reproduce the results, King said. Furthermore, it's strange that the researchers say they looked at a maternal descendant of Kosminski, given that men can't pass on mitochondrial DNA. In fact, the researchers didn't say how the descendants were related to Eddowes and Kosminski (even though the descendant of Eddowes was named by The Independent in 2014), nor did they publish these people's full mitochondrial DNA sequences, citing privacy reasons.

That's problematic, King said. The researchers claimed to have the entire mitochondrial DNA genome, but they only looked at a couple of mitochondrial DNA segments. And they did it at such low resolution, the results could be similar in large swaths of people.

"At that low resolution, it could be that thousands and thousands and thousands of people share the mitochondrial DNA types that they're finding," King said. "The fact that there's a match with a relative, who may or may not have breathed on the shawl in the first place … statistically, that's not very strong evidence."

As for privacy reasons, the researchers weren't sensitive to the fact that by naming Kosminski, they were associating his living relatives with a notorious murderer, King said. In King's study of Richard III, she used genetic material from two of his living female-line relatives, both of whom gave their informed consent that their mitochondrial DNA be made public. King wonders if the researchers explained the science and asked for the informed consent at all. Plus, given that these particular mitochondrial DNA analysis was so vague, it wouldn't have identified the descendants anyway, King said.

With all of these caveats, does the new paper offer any clues on the Jack the Ripper case?

"No, sadly not," King said. "For all we know, Kosminski was Jack the Ripper, but this paper unfortunately does not tell us that."