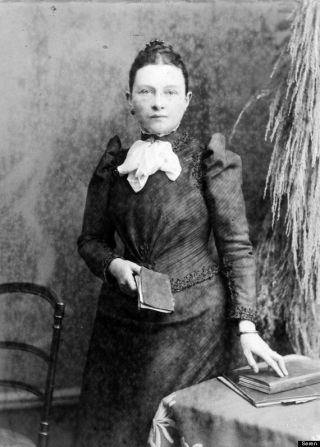 Lizzie Williams, implicated as a suspect in the Whitechapel murders in John Morris's book "Jack The Ripper: The Hand Of A Woman."
(Image: © Seren)

It's history's most famous unsolved crime spree. In 1888, a serial killer who came to be known as Jack the Ripper gruesomely murdered five prostitutes in London's Whitechapel district. More than 100 men, from Lewis Carroll to Queen Victoria's grandson, have since been labeled suspects, and the guesswork has spawned an entire field of study, known as "Ripperology." Now, a new book turns the speculation on its head, by arguing that Jack the Ripper was actually a woman.

John Morris, a retired lawyer living in Ireland, has implicated Lizzie Williams, the wife of the physician Sir John Williams, who was himself labeled a Ripper suspect in a 2005 book. Morris claims Lizzie killed the prostitutes out of anger over being infertile. Despair over her condition is also what drove her to remove the wombs of three of her victims.

Tantalizing as this new theory may be, other Ripperologists have decried the notion.

In his book, "Jack The Ripper: The Hand Of A Woman" (Seren, 2012), Morris cites as evidence the fact that none of the five murdered prostitutes was sexually assaulted, and that the personal items of one, Annie Chapman, were laid out at her feet "in a feminine manner." Moreover, three small buttons from a woman's boot were found in blood near the body of another victim, and remnants of women's clothing, including a cape, skirt and hat, were found in the fireplace ashes of a third victim, Mary Kelly. These items did not belong to the victims.

"The case for a woman murderer is overwhelming, but unfortunately it does not sit well in some quarters where such a theory flies in the face of long-held beliefs," Morris was quoted as saying in the Daily Telegraph. "Because everyone believes that the murderer was a man, all the evidence that points to a woman has been ignored."

Indeed, the theory has been met with skepticism.

Paul Begg, a leading Jack the Ripper expert who has authored several books on the subject of his identity, thinks the case for Lizzie Williams is weak. "The original book putting John Williams in the frame was bad but this one is even worse," Begg told the Daily Express.

Sir John Williams was obstetrician to members of the British Royal Family, and was accused of the Ripper crimes in "Uncle Jack" (Orion, 2005), co-written by one of his descendants, Tony Williams. The book claims that the surgeon knew the victims personally, and killed and mutilated them in an attempt to research the causes of infertility. However, outside experts later showed that much of the research in the book was flawed; for example, a key piece of documentary evidence supposedly connecting Williams to one of the Ripper victims was found not to be in the original source document that was cited.

Clearly, the case of the Whitechapel murders is far from closed.