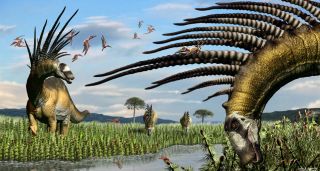 A group of B. prosupinax look totally punk rock while chowing down on some Cretaceous Period greenery.
(Image: © Jorge A. González)

Some dinosaurs are known for their long necks, others for their horned heads or club-like tails. Bajadasaurus pronuspinax, a newly described dinosaur discovered in Patagonia, Argentina, will be known for its sexy mohawk.

In a study published Feb. 4 in the journal Scientific Reports, a team of archaeologists from CONICET, the Argentine government's science agency, first described the punkish new addition to the dinosaur family tree.

B. pronuspinax, whose name translates roughly to "lizard from Bajada with forward-bending spines," was a large herbivore that lived about 140 million years ago, near the start of the Cretaceous period (145 million to 65 million years ago). When the researchers discovered the dinosaur's nearly complete skull in 2013, they knew they were looking at a species of sauropod — a group of long-necked, four-legged dinosaurs that includes the Brontosaurus and Brachiosaurus. [Photos: See the Armored Dinosaur Named for Zuul from 'Ghostbusters']

It wasn't until shortly thereafter that the team uncovered a piece of the dino's neck and realized they had found something special. Jutting out from a piece of vertebrae were two thin, antler-like spines that measured nearly 2 feet long (60 centimeters) apiece. Unlike other sauropods whose horns swept back down the length of their necks, Bajadasaurus' spines bent forward. According to the researchers, it's likely that similar spines protruded from every one of the dino's vertebra — some spines measuring as long as 5 feet (152 cm) long — giving the creature a flashy mohawk of horns.

"We believe that the long, pointed spines — extremely long and thin — on the neck and back of Bajadasaurus … should serve to deter potential predators," lead study author Pablo Gallina, a paleontologist at CONICET, said in a translated statement.

While the narrow, bony horns might snap easily under the pressure of a predator's jaws, the mere appearance of those spines could've been a deterrent — a sort of "disturbing fence" between the predator and its meal, the researchers wrote in their study.

However, it's impossible to know for sure how B. pronuspinax used its spiky neck-mohawk (or even if the dino had spines on every single vertebra). Previous researchers have suggested that maybe long, thin neural spines like these supported pairs of fleshy "sails" that helped dinosaurs regulate their own body temperatures or signal virility or strength to neighboring dinos. Perhaps the spines were a place to store fat (like a camel's hump), or maybe they were simply meant to look sexy, the authors wrote.

"I can't help but think that the spines functioned in the same way as [punk singer] Johnny Rotten's hair: to get attention," Steve Brusatte, a paleontologist at the University of Edinburgh in Scotland and editor of the new paper, told Gizmodo. "These must have been display structures, [meant] to attract mates or intimidate rivals or maybe to rock out in other ways that only the dinosaurs would have known."