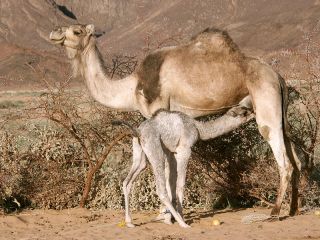 Camels are mammals with long legs, a big-lipped snout and a humped back. There are two types of camels: dromedary camels, which have one hump, and Bactrian camels, which have two humps. Camels' humps consist of stored fat, which they can metabolize when food and water is scarce.

In addition to their humps, camels have other ways to adapt to their environment. They have a third, clear eyelid that protects their eyes from blowing sand. Two rows of long lashes also protect their eyes. Sand up the nose can be a problem, but not for camels. They can shut their nostrils during sand storms.

Humans have used camels as a means of transport for thousands of years. They can carry about 375 to 600 lbs. (170 to 270 kilograms) on their backs, according to National Geographic. This earned these beasts of burden a nickname, "ships of the desert." Domestic camels are often the main source of meat, milk and even leather or wool products.

Camels aren't picky about what they eat. Their thick lips allow them to eat things that most other animals couldn't, such as thorny plants. Camels are herbivores, though, so you won't find them eating meat.

Filling up on water, when it's available, is very important for camels. They can drink 30 gallons (113 liters) of water in just 13 minutes. Their bodies rehydrate faster than any other mammal.

When there is little food and water, the camel's hump fat releases water; 9.3 grams of fat releases 1.13 grams of water, according to research by the University of Singapore. Camels can survive up to six months without food or water.

The two types of camel are found in different parts of the world. The dromedary camel, also called an Arabian camel, can be found in North Africa and the Middle East. The Bactrian camel lives in Central Asia. No matter the type, camels are usually found in the desert, prairie or steppe. Though many people think that camels only live in hot climates, they do well in temperature ranges from 20 degrees F (minus 29 degrees C) to 120 degrees F (49 degrees C).

Camels like to stay together in groups called herds. The herds are led by a dominant male, while many of the other males form their own herd called a bachelor herd. Camels are very social and like to greet each other by blowing in each other's faces.

After a gestation of 12 to 14 months, a mother camel will find a private spot to have her young. Female camels usually only have one baby, but sometimes camels have twins.

Baby camels are called calves. The newborn calf is able to walk within 30 minutes, though the two won't rejoin the herd until around two weeks later. Camels become fully mature when they are 7 years old. Camels live around 17 years.

Here is the classification of camels, according to Integrated Taxonomic Information System:

The wild Bactrian camel is considered critically endangered by the International Union for Conservation of Nature and has a population that is decreasing. In fact, wild camels are one of the most endangered large mammals. According to the Wild Camel Protection Foundation, there are fewer than 1,000 wild camels alive.

The camel's hump is like a storage container. When camels use their stored fat, their hump will diminish. When they eat and drink again the hump will refill with fat.

Camels are known for spitting on people. In fact, the animals are throwing up the contents of their stomach along with spit. This is a defense tactic when the animals feel threatened.

The large beasts make a variety of moans, groans and deep, throaty bellows. One of the camel's noises was even used to voice the character Chewbacca in the Star Wars movies.