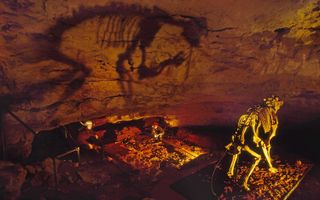 A marsupial lion skeleton found during a dig in Naracoorte National Park, Australia. Note that this particular specimen does not have an intact tail.
(Image: © Mint Images/Shutterstock)

The marsupial lion — a giant carnivore that hunted in Australia tens of thousands of years ago — has long mystified scientists. But the recent discovery of more of its fossils, including a nearly complete skeleton of the extinct beast, has revealed some of its secrets.

The newfound bones suggest that the marsupial lion (Thylacoleo carnifex) was an apex predator that relied on both ambush hunting and scavenging to satisfy its hearty appetite. It also had a stiff, muscular tail that it could use as tripod while handling food or climbing, just as many living marsupials, such as the kangaroo and Tasmanian devil, do today, the researchers said.

However, although the remarkable skeleton gives clues about the carnivore's method of locomotion, the fossils don't provide direct evidence about how the marsupial lion behaved. "Drawing very confident inferences [about behavior] can be difficult," said Robin Beck, a lecturer in biology at the University of Salford in the United Kingdom, who was not involved with the study. "A lot of animals can do things that maybe you wouldn't predict [that they could do] based on their skeletons." [6 Extinct Animals That Could Be Brought Back to Life]

For example, "goats are very good at climbing trees, and that's something you would never predict from their skeleton," Beck told Live Science.

Despite this, scientists were thrilled to examine the newfound specimens of the marsupial lion. In spite of its name, the creature is not a lion, but rather a 220-lb. (100 kilograms) marsupial that vaguely resembles the mammalian lion. Moreover, it is the largest marsupial carnivore on record.

"It's a very odd animal," Beck said. "It has very odd teeth; it has premolars like bolt cutters. Unlike carnivores today, it doesn't have big canines. It seems to be using its incisors for killing prey instead." It also had "very powerful grasping hands," he added.

The beast, which lived during the Pleistocene epoch from about 2 million to 50,000 years ago, was first described in 1859. Back then, pieces of its skull and jaw were collected at Lake Colongulac in Victoria, Australia, and sent to Sir Richard Owen at the British Museum, the researchers said.

The newly discovered fossils — unearthed in Komatsu Cave in the town of Naracoorte and Flight Star Cave in the Nullarbor Plain, both in southern Australia — include the first known remains of the carnivore's tail and collarbone. The skeleton indicated that the marsupial lion had a rigid lower back and powerful forelimbs attached to its strong collarbones, said the study's researchers, Roderick Wells of Flinders University and Aaron Camens of the South Australia Museum in Adelaide.

Beck said that the interpretations about the carnivore's locomotion are "very plausible, clearly, based on its [limb] proportions." He added, "It doesn't seem to be a pursuit predator or something that could run prey down. So, this idea that it could have been an ambush predator and perhaps climb as well seems to fit in very well [with the evidence]."

There is other evidence of the marsupial lion's climbing expertise. Researchers found claw marks in a cave used by the beasts, according to a 2016 study in the journal Scientific Reports.

"Based on where the claw marks were positioned, the animal would have had to climb up to make those scratch marks," said Beck, who was not involved in that study. "There, we have direct evidence that marsupial lions were capable of climbing. This is direct behavioral evidence of what it was doing, rather than an indirect inference based on the skeleton."

The new study was published online today (Dec. 12) in the journal PLOS One.