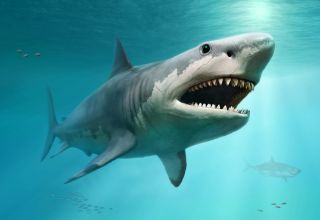 Why did the mega-shark megalodon die out? It could have been its highly active metabolism, new research suggests.
(Image: © Shutterstock)

WASHINGTON — Why did the monster shark megalodon go extinct? New research has answers, and the shark's high body temperature may have played a part.

Megalodon was a mega-shark, an enormous, prehistoric "Big Bad" that still fuels nightmares and fascinates scientists today. This massive fish could grow to up to 60 feet (18 meters) long, and it took down prey with a terrifying mouthful of teeth, each of which measured as long as 7 inches (18 centimeters) — longer than a human hand. [Top 10 Deadliest Animals (Photos)]

Fearsome though this giant predator was, it disappeared from the oceans about 2.6 million years ago. And new research looked to the body temperature of Otodus megalodon to offer an explanation for what may have caused it to die out.

Like some other sharks alive today, such as great white and mako sharks, megalodon is thought to have been able to thermoregulate, or adjust its body temperature in response to cooler or warmer water. This would have enabled it to hunt in a broader range of habitats than other sharks, according to research presented today (Dec. 10) at the annual meeting of the American Geophysical Union (AGU).

But was megalodon's body temperature similar to that of modern sharks? To find out, scientists used geochemistry to examine rare carbon and oxygen isotopes in megalodon teeth and in teeth of modern sharks. (Isotopes are versions of molecules with different numbers of neutrons.) These isotopes form different bonds depending on the animal's temperature when teeth form, researcher Michael Griffiths, an associate professor in the Department of Environmental Science at William Paterson University in New Jersey, told Live Science.

With this method, scientists could estimate what the ancient beast's average body temperature may have been and thereby find clues that might explain how megalodon's biology or habits doomed it to extinction, the researchers said.

Their preliminary results suggested that megalodon was "quite warm" for a shark, Griffiths said. Ancestors of today's makos and great white sharks that swam alongside megalodon millions of years ago likely had body temperatures of about 68 to 86 degrees Fahrenheit (20 to 30 degrees Celsius).

With such a high body temperature, megalodon must have had a very active metabolism that required frequent feeding, Griffiths said. Then, the climate warmed, and megalodon's prey moved to cooler waters at higher latitudes. Food scarcity and competition from new predator species such as killer whales may then have been the fatal combination that drove megalodon to extinction, Griffiths explained.

"Large climatic shifts combined with evolutionary limitations may provide the 'smoking gun' for the extinction of the largest shark species to ever roam the planet," the scientists said.