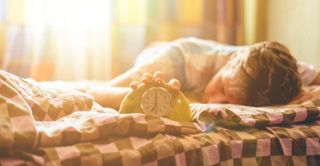 Of all the modern inventions we rely on in our daily lives, the alarm clock is probably the most universally despised. Its jarring morning jangles jolt us uncomfortably out of our slumber, and back to reality. And yet however annoying alarm clocks are, they're also indispensable in getting us out of bed. That raises an interesting question: How did people wake up before alarm clocks became so ubiquitous?

Throughout the ages, even the simple act of telling the time has presented a huge challenge to humans that we've tried to solve with elaborate inventions. The ancient Greeks and Egyptians developed sundials and towering obelisks that would mark the time with a shadow that moved with the sun. Dating back to around 1500 B.C., humans produced hourglasses, water clocks and oil lamps, which calibrated the passing of hours with movements of sand, water and oil.

Out of these early inventions came a few rudimentary attempts to create a morning alarm — such as candle clocks. These simplistic devices from ancient China were embedded with nails that were released as the wax melted away, leaving the nails to clatter loudly into a metal tray below at a designated time, waking the sleeper. [Why Can't We Remember Our Dreams?]

But such crude inventions were unpredictable and unreliable. And so, until more precise mechanical inventions were created, humans had to depend on another more innate form of timekeeping: our own internal body clocks.

Humans have two biological processes that underlie our natural sleeping and waking patterns: homeostasis and circadian rhythms, said Melinda Jackson, a senior research fellow in sleep and psychology at the Royal Melbourne Institute of Technology University in Australia. The main principle underlying homeostasis — a signaling process that's governed by the hypothalamus region in the brain — "is that the longer we are awake, the higher our drive for sleep or likelihood of falling asleep [is]," Jackson told Live Science. Then, "when we fall asleep, the drive for sleep dissipates across the night" — which signals when it's time to wake up, she said.

Overlaying this, the circadian rhythm — also controlled by cells in the hypothalamus — is a parallel process that regulates phases of sleepiness and alertness over the course of a day. This process is also affected by light and dark, meaning that periods of alertness and sleepiness usually correspond with morning light and nighttime darkness, respectively. In an era before alarms, Jackson says it's probable that this is how people woke up, cued by the accumulated hours of sleep, paired with the rays of the rising sun.

In her research on Britain's historical sleeping practices, Sasha Handley, a senior lecturer in early modern history at the University of Manchester in the United Kingdom, has discovered that people during this Christian era would often orientate their beds toward the east — where the sun rose. Their reasoning was partly religious, because the east was believed to be the direction from which Jesus would come during his resurrection, she said. But it's possible that this orientation also enabled people to wake with the sun's rays.

"It's hard to imagine now a world where your patterns of sleeping and waking up again were directly influenced by the setting and rising of the sun," Handley told Live Science.

Another simple, but notable fact is that the people of yore had no way of soundproofing their houses against the noises of the outside world, like we do today, Handley added. "For a society that was overwhelmingly agriculture before the Industrial Revolution, noises of nature were probably really important things," she said. The sounds of roosters crowing and mooing cows waiting to be milked would have interrupted people's slumber. Church bells also functioned as a type of early alarm clock, she said. [How Does an Atomic Clock Work?]

Handley thinks that historically, people may also have been more personally motivated to wake up at a particular hour. Research on early modern Britain shows that during this era, the morning hours were seen as a spiritual time, when one's closeness to God could be demonstrated by waking up at a scheduled time to pray. "Waking up in a scheduled way was seen to be a sign of health and good ethics," Handley said. "There's almost a sense of competitiveness that underpins this: The earlier you got out of bed, the more God had favored you with physical strengths."

But by the 1600s and into the 1700s, self-reliance for waking probably became less crucial with the spread of the first domestic alarm clocks, known as lantern clocks, driven by internal weights that would strike a bell as an alarm. In 1800s Britain, wealthier families would also employ knocker-uppers — people armed with long sticks they used to tap incessantly on someone's window until they were roused. (Some knocker-uppers even used straws through which they would shoot peas at their clients' windows.) These human timekeepers were gradually replaced by the spread of cheap alarm clocks in the 1930s and 1940s — the precursors to those we know today.

But is our modern-day dependence on alarms actually a good thing? Jackson isn't so sure. The fact that nowadays we tend to take the opportunity on weekends to sleep in is "an indication that people need to make more time for sleep during the week by going to sleep earlier at night, but we don't do this," she said. Instead, we're working later and longer than ever, and our evenings are invaded by televisions, laptops and mobile phones. "Sleep is not prioritized," Jackson said. "So, we don't have much choice other than to use an alarm."

In this regard, Handley thinks history may offer a few lessons. During early modern history, there's evidence that people attached great importance to the health benefits of sleep. "Sleeping well is a really essential part of their regular health care practices," Handley said.

Nighttime was highly ritualized: People consumed soporific herbal drinks, stuffed their pillows with soothing scented flowers and engaged in calming activities like prayer and meditation or in mindless hobbies such as embroidery right before bed.

If we were to take some advice from these historic humans, Handley said it would be to "put sleep back at the center of your 24-hour cycle. Treasure it and revel in it. It is the single best thing you can do for yourself." As an added bonus, waking up wouldn't be such a drag.