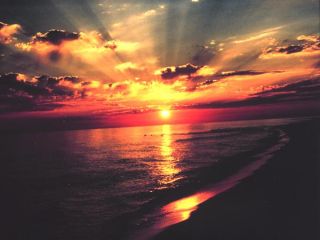 The horizon from the Gulf Coast of Florida.
(Image: © NOAA)

You've woken up out of a coma. You yank the IV from your arm and stumble out of the hospital. The sun is perched on the horizon. Can you tell whether it's rising or setting?

Contemplating this scenario while gazing sunward at dusk or dawn, we might feel as if we could sense the difference between the two times of day. But in real life, it's impossible to completely divorce our perceptions of the scene from our awareness of the hour. So, is there any objective way to distinguish an upward-trending sun from a downward one?

According to atmospheric physicists David Lynch and William Livingston, the answer is "yes, and no."

All "twilight phenomena" are symmetric on opposite sides of midnight, and occur in reverse order between sunset and sunrise, the authors note in "Color and Light in Nature" (Cambridge University Press, 2001). That means there's no inherent, natural cause of a major optical difference between them. However, two human factors break their symmetry.

The first is in our heads. "At sunset, our eyes are daylight adapted and may even be a bit weary from the day's toil," Lynch and Livingston write. "As the light fades, we cannot adapt as fast as the sky darkens. Some hues may be lost or perceived in a manner peculiar to sunset. At sunrise, however, the night's darkness has left us with very acute night vision and every faint, minor change in the sky's color is evident." In short, you may perceive more colors at dawn than at dusk. [Red-Green & Blue-Yellow: The Stunning Colors You Can't See]

Human activities also drive a divergence between them. "At sunset the sky is full of pollutants and wind-borne particles," the authors write. "During the night, winds die down, smog-producing urban activity eases and the atmosphere cleanses itself. The dawn is clearer than any other time of day."

It's a matter of opinion whether pollution or a lack of it makes for prettier twilights. At dawn, clearer skies enable more brilliant reds and oranges to make their way through the atmosphere to your eyes, whereas thicker atmospheres at dusk tend to dull these colors, leading to more washed-out sunsets. On the other hand, more dust and smog (at sunset) can have the effect of scattering light across a greater region of the sky, creating a larger drape of colors, whereas sunrise colors tend to be more focused around the sun. Whichever you prefer, you can frequently tell a sunrise from a sunset by the fact that the latter appears more chaotic, and the former, tidier.

According to the astrophysicist Neil Degrasse Tyson, director of the Hayden Planetarium in New York, there's also a trick for distinguishing a sunrise from a sunset played in reverse. Because of Earth's tilt, the sun doesn't rise or set along a vertical line, but at an angle. "When viewed from all latitudes north of the Tropic of Cancer (23.5 degrees north latitude), the sun always rises at an angle up and to the right, and sets and an angle down and to the right," Tyson writes on his website. "That's how you can spot a faked sunrise in a movie: it moves up and to the left. Filmmakers are not typically awake in the morning hours to film an actual sunrise, so they film a sunset instead, and then time-reverse it, thinking nobody will notice."

So if you see a rising sun move up and to the left, you know you're in the twilight zone. Better head back to the hospital.