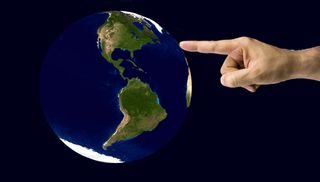 If the Earth weren't tilted on its axis, there would be no seasons. And humanity would suffer.
(Image: © ilker canikligil | Shutterstock (hand); Wikiscient | Creative Commons (Earth))

When a Mars-size object collided with Earth 4.5 billion years ago, it knocked off a chunk that would become the moon. It also tilted Earth sideways a bit, so that our planet now orbits the sun on a slant. Those were two huge changes. Now, over the course of the year, the amount of sunlight striking the Northern and Southern hemispheres varies as they wobble back and forth — first the Southern Hemisphere leaning sunward, then the Northern. This cycle drives Earth's seasonal variation.

It's a lucky thing, too. Without Earth's tilt, humanity would be in a sorry state.

Forget modern technology, the steam engine, or sliced bread. In a world without seasons, there wouldn't even be wheat. According to Don Attwood, an ecological anthropologist at McGill University in Montreal, humans would probably never have advanced past a state of living in small, scattered settlements, scrounging for survival and often dying of horrific insect-borne diseases.

Scientists think an Earth without a tilt would be stratified into climate bands that would get progressively colder as you moved away from the equator. Humans would never survive the continuous winter of the high latitudes, and so we would likely congregate in the planet's tropical midsection. Fortunately, as things are, Earth's tropical zones tend to have minimal temperature and day-length variability over the course of the year, and so these regions can serve as archetypes for what a seasonless Earth might be like.

If the habitable world were a humid tropical zone like the rain forests of the Congo, unrelenting rainfall would quickly erode soil in any areas cleared for farming, and would leach nutrients down below root level, swiftly rendering tilled land infertile for crops.

"The result is that humans (so far) can only live with low population densities supported by shifting agriculture, or something like it, in most of the humid lowland tropics," Attwood told Life's Little Mysteries. "Low population density and low agricultural productivity result in small, scattered settlements. The amenities of modern civilization cannot be built on such a foundation."

On top of our problems with agriculture, humans would also be plagued by disease pathogens, which thrive in warm, humid environments. "Winter protects much of the world's population from tropical insects (which carry deadly diseases) and a long, nasty list of tropical diseases of humans, crops and livestock. HIV is one virus that has escaped its tropical forest home. Many others, like the Ebola virus, are waiting for their chance," Attwood said. "Human mortality and morbidity rates (due directly to disease and indirectly to hunger) would go through the roof." [10 Species Our Population Explosion Will Likely Kill Off]

If, on the other hand, Earth were unwaveringly warm and dry like the Arabian Peninsula, our species would be even worse off, or extinct. "As should be evident, the arid tropics have even less potential for supporting large, complex societies," Attwood said, "except in Dubai, etc., where people live entirely on fossil energy from their oil wells."

Aside from its role in stifling the growth of deadly pathogens and their insect carriers, winter has been vital for human development in many other ways. First off, wheat grows only where there are cool or cold winters. "That's a vital invention that helps feed the world," Attwood said. Other essential food crops, including corn (maize), potatoes, oats and barley, also grow better where there are cool or cold winters.

Not just crops but also the Industrial Revolution, and all the technologies that sprung from it, have their roots in the existence of winter. Though it usually isn't explained this way, Attwood said, modern technology can be thought of as a by-product of the development of new ways to keep warm.

"People in Britain and Western Europe need heat during the winter," he explained. "With a growing population in the 18th century, Britain was running low on forest lands for wood fires. Coal helped to heat people's homes and happened to be abundant in England. The inventors of steam engines soon discovered that coal could be used to power industrial machinery." Furthermore, many other crucial advances in science, technology and medicine have occurred in places with cold winters, he said — though the correlation between these developments and climate is not well understood. [Top 10 Inventions that Changed the World]

But we've already invented steam engines and modern medicine, and these technologies aren't going anywhere. What would be the biggest change that would occur if Earth suddenly lost its seasonal variation today?

"People now living in the temperate zones would be much worse off if climate change reduces or eliminates winter," Attwood said. "Winter protects much of the world's population from … a long, nasty list of tropical diseases. Want to share your living space with malarial mosquitoes and tsetse flies?"