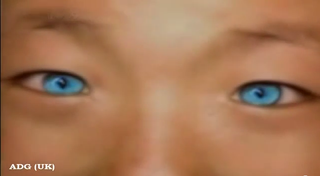 Nong You-hui's teachers and parents claim he can see in the dark.
(Image: © YouTube | ADG (UK))

According to a news reel from China, a young boy there possesses the ability to see in the dark. Like a Siamese cat's, his sky-blue eyes flash neon green when illuminated by a flashlight, and his night vision is good enough to enable him to fill out questionnaires while sitting in a pitch black room — or so say the reporters who visited Nong Yousui in his hometown of Dahua three years ago.

The footage of Nong and his strange-looking eyes originally surfaced in 2009; it got little attention at the time, but is now making a splash all over the Web. If the boy really does have a genetic mutation that confers night vision, then he would be an interesting subject for analysis by vision scientists, evolutionary biologists, and genetic engineers alike — but does he?

The experts we shared the video with say Nong does have unusually colored irises considering his ethnicity, but he's not the next step in human evolution.

Night vision is made possible by a layer of cells, called the tapetum lucidum, in the eyes of cats and other nocturnal animals. This thin layer is a "retroreflector" — when a beam of light hits it, it reflects the light directly back along its incoming path. The reflected beam constructively interferes with the incoming light beam, amplifying the overall signal that hits the retina and enabling the animal to see in very low-light conditions. Retroreflection also causes cat eyes to flash when they are lit upon at night, and experts say Nong's eyes, if they are truly catlike, should do the same. [Red-Green & Blue-Yellow: The Stunning Colors You Can't See]

"It would be easy to test the boy’s eyes for retroreflection (eyeshine), which would be indicative of a tapetum lucidum," said Nathaniel Greene, a physicist at Bloomsburg University of Pennsylvania who has studied retroreflection.

In fact, such a test is run in the video.

In the footage, Nong's teacher claims the boy's eyes flash when shined with a flashlight in the dark, but the reporters don't seem to be able to catch the effect on camera. When Nong's eyes are illuminated in the dark, they appear normal. James Reynolds, a pediatric ophthalmologist at State University of New York in Buffalo, noted, "A video could capture [eyeshine] easily, just like in nature films of leopards at night."

Furthermore, there is no single genetic mutation that could produce a fully formed and functioning tapetum lucidum, Reynolds explained; such an ability would require multiple mutations, which don't just happen all at once. Evolution happens incrementally, he said, not by leaps and bounds. "Evolutionarily, mutations can result in differences that allow for new environmental niche exploitation. But such mutations are modified over long periods. A functional tapetum in a human would be just as absurd as a human born with wings. It can't happen," he told Life's Little Mysteries.

On the other hand, in the footage, the reporters gave Nong a questionnaire to fill out while sitting in a dark room, and they acted surprised by his ability to see and complete the fill-in-the-blank form. Even if he doesn't have cat eyes, he may nevertheless have unusually good night vision, Reynolds said. He could have a rod-rich retina, for example — a retina that contains a higher than usual number of cells involved in light detection. Or the video could be a total hoax.

"It is hard to say what the truth is about this boy," said Dennis Brooks, professor of ophthalmology at the University of Florida's College of Veterinary Medicine. "A good ophthalmic examination by a physician ophthalmologist is in order, I think."

Editor's Note: Adam Hickenbotham, an optometrist and clinical researcher at the University of California, Berkeley, contacted us to say he believes Nong has a mild case of ocular albinism. This would explain the boy's lightly-pigmented irises, and would also cause him to have a lower than usual amount of pigment in his retinas. this would make them appear slightly reflective, and would cause Nong to have difficulty seeing in bright light.